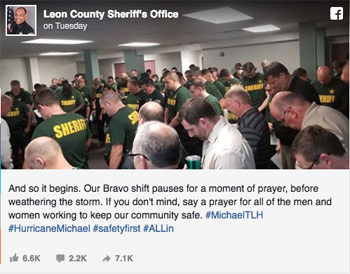 Many were stunned by the ferocity of Hurricane Michael, which became the strongest hurricane to make landfall in the Florida Panhandle and the third most intense in history to hit the U.S. mainland.

Some were lulled into a false sense of security because Michael developed slowly over the course of a week, then strengthened rapidly on October 9th as it passed through the Yucatan Channel, clipped the tip of western Cuba and headed north, becoming a Category 4 within hours.

Meteorologists were alarmed as they noted the hurricane’s “rapid intensification and deep bursts of convection within the eyewall.”

First responders gathered from all over the South, with little time to prepare as winds topped 155 miles per hour.

On the evening of October 9th, the night before Michael made landfall, deputies from the Leon County Sheriff’s Office in Tallahassee assembled for duty, ready to accept their assignments.

Knowing the potential dangers to themselves and others, they did the most important thing anyone could do in the face of nature’s fury.

The team paused “for a moment of prayer, before weathering the storm,” according to a photo posted on social media that captured the moment.

The storm was particularly cruel to Mexico Beach, Florida, where many homes were scraped off their foundations by the storm surge or obliterated by the destructive winds.

Hurricane Michael also brought damaging weather to Georgia and the Carolinas as it plowed north, where dangerous conditions will continue.

As of October 10th, 13 had died in Central America as a result of Michael and two in the U.S. In Cuba, the hurricane’s winds left over 200,000 people without power.