She is the daughter of a faith preacher and traveling evangelist who first saw God’s power to heal when she was young. But after she developed her own serious, crippling disease, she thought God might heal her gradually, but was shocked when her healing was instantaneous and miraculous – something out of the pages of the Bible.

“I always believed in his power,” says Dianna Hobbs, author of God Did It: A True Story of Miraculous Healing.

At 5-years-old Dianne gave her life to Jesus and by 11 she was preaching the Gospel. “I don’t even know how I developed such a personal relationship with him,” she says, “but I would hide away in my room and write letters to Jesus. I loved him early on and still love him that much more now.”

In 2015 she developed trouble with her vision and learned she had glaucoma. “It had progressed so much and my inter ocular pressure was so high I failed the test miserably. Because my dad was a faith preacher he didn’t tell me it was in my family line. We didn’t do a whole lot with doctors,” she notes.

“The top ophthalmologist in western New York told me in five years I would be blind and there was nothing I could do to change it.” He prescribed eye drops to slow the progression of the disease.

Understandably, she was devastated. She got together with a prayer warrior and they prayed and believed God for healing. 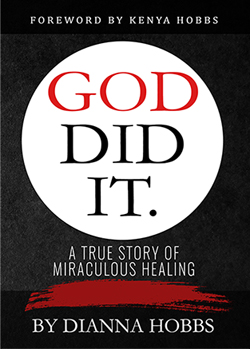 A few months later she went back to the same ophthalmologist. When he examined her, he was confused. “I have seen what drops can do and they can’t do this…it looks like you have new eyes!”

Dianna gave all the glory to God for the healing of her eyes, but health problems in other parts of her body intensified over the next two years. She suffered from aching joints, mysterious bruises on her skin, fatigue, and constipation.

Her primary physician recommended changes to her diet and increasing her water intake, but couldn’t find anything wrong.

She was referred to a specialist, who thought she might have leukemia.

Then she visited an oncologist who tested her and was “stupefied.”

Two years elapsed before she was referred to a rheumatologist, Dr. Danilo Saldana, originally from the Philippines. “He combed over all my tests and it took him 20 minutes to diagnose me. He told me exactly what was wrong.”

She had two diseases: rheumatoid arthritis and fibromyalgia. She learned that her immune system was attacking her own body.

“By the time he discovered it, there was irreversible damage done to my bones, joints, my heart, bowels, lungs, and my voice. I could no longer talk and I’m a singer and a preacher.”

The doctor shook his head and said there was nothing he could do for her. “We found it too late,” he said. “The most we can do is make you comfortable.”

Dianna lost her ability to walk. The x-rays revealed the arthritis had eroded her bones and joints.

“I was in adult diapers because I suffered with this condition in my bowels where I could not use a bathroom for days and then spontaneously release.”

When she was alone with herself, Dianna wrestled with faith. She indulged in her own pity party. In one moment of despair she cried out: “God, I’m a prayer warrior, I love you and I serve you, I’m devoted to your kingdom and missions. Why are you allowing this to happen to me?”

A few weeks after her diagnosis, she felt God impress on her heart that she should have a prayer service. Initially, she was reluctant. “I was embarrassed and didn’t want anybody to see me. I had lost a lot of weight and didn’t look good.”

Lord, how am I going to have a prayer service when I can’t talk? she wondered.

The next day an old friend contacted her parents with a tone of urgency: “I have to find Dianna. God told me I have to have a prayer service for her.”

The confirmation from her friend was all she needed. “He was testing me to trust him and see if I would do what he says,” Dianna recalls.

In the age of social media, the news about her prayer service spread like wildfire. “There were 50 intercessors from all over the world, people in different time zones. Some of them were staying up all night to pray at the exact hour of the service.”

On the evening of the prayer gathering Dianna’s husband, Kenya, had to carry her into the sanctuary. When people saw her condition, many were crying. “It was like a public funeral. It was like when Jesus when into the house of Jairus after his daughter died.”

“I was so bad off. I was crying; I was in pain. They sat me down and positioned me in a chair. I was embarrassed; I was sad.”

She wished she had more faith. “God told me in a dream my healing was going to be miraculous,” but she wrestled with such a hope, thinking there might be more gradual healing.

As people gathered around Dianna at the prayer service and placed their hands on her, something remarkable happened.

“I’ve never felt anything like it before,” she says. It felt like a mixture of fire and electricity surging through her body.

“I heard this scream from somewhere and then I realized it was me. I hadn’t been able to use my voice.”

Her right leg kicked and then her left leg kicked over a stool. Her body jerked as if someone hit the power switch on a defibrillator. “I felt my body jerk. My husband thought I was going to fall over.”

But instead of falling, she got the urge to walk. “It felt like somebody put strings in my thighs and started pulling up, so I was walking like a toddler.”

“The doctors ran all the tests again and they were stunned. My blood pressure regulated and they couldn’t find any bone or joint damage. Everything reversed like God created everything new. I have no pain and no limitations. I am on no drugs. It was as if it never happened.

“God healed me completely and He did it immediately. It was like what He did in the Bible. I thank Him for that. I believe He can. Not only can He, but He will!”

“All my test results are different. We have the before and after records,” she says.

Dianna says God has given her a great heart and compassion for people who are suffering. “Our trials are not just for us but for others — and His glory,” she says.

For more information about “God Did It,” visit www.GodDidItBook.com