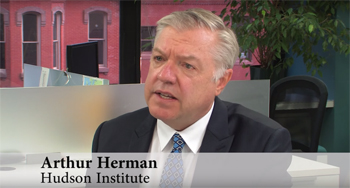 The United States and its adversaries are engaged in a feverish contest to produce the world’s first operational quantum computer. Whoever holds the keys to the computer will also hold the keys to the kingdoms of the earth – controlling their financial and national security affairs.

“Such a system theoretically would have enough computing power to open the encrypted secrets of every country, company and person on the planet. It would also enable a foreign creator to end America’s dominance of the information-technology industry and the global financial system,” writes Arthur Herman, a senior fellow at the Hudson Institute, in a piece that appeared in the Wall Street Journal.

The quantum computer will solve problems thousands of times faster than any supercomputers in use today by employing the principles of quantum mechanics.

“All current computers process data in a linear sequence of one and zeros,” Herman notes. But in the curious world of quantum mechanics “a quantum bit, or ‘qubit,’ can be a zero and a one at the same time, and do two computations at once.

This presents a gigantic problem for encryption, which keeps your bank account safe – along with corporate and government secrets. Encryption is based on math problems that would take a normal computer centuries to solve.

“A future quantum computer will be able to decrypt such systems almost instantaneously,” Herman writes. “Even Blockchain will not be able to withstand the first quantum attack if it relies on two-key encryption architecture, which protects nearly all digital information today.

“To understand the scale of the threat, imagine a thousand Equifax breaches happening at once.” In the wrong hands, a diabolical person or government entity could gain control of the world — exceeding the threat of the worst James Bond-style super-villains.

Most experts believe such a computer will be developed within the next 10 years, according to Herman. In the U.S., much of the work on quantum computing is being conducted by companies like Google and Microsoft.

The European Union is investing nearly €1 billion to produce such a computer. Australia, the U.K. and Russia have also entered the quantum race.

“But the real national leader in quantum research investment is China,” according to Herman. “This summer it launched the first satellite capable of transmitting quantum data. It’s building the world’s largest quantum research facility to develop a quantum computer specifically for code breaking and supporting its armed forces, with quantum navigation systems for stealth submarines.

“Beijing is investing around $10 billion in the facility, which is to be finished in 2½ years.”

By contrast, the U.S. government is spending only $200 million a year on quantum research, spread throughout several agencies—from the National Security Agency to the Energy Department.

“While IBM recently set a new benchmark with its 17-qubit processor, and Google insists it will reach the 50-qubit threshold before the end of this year, China is steadily advancing toward a 40-qubit prototype—and remains determined to reach “quantum supremacy.”

Herman is calling for a “National Quantum Initiative” fashioned after the Manhattan Project that developed the first atomic bomb to make sure the U.S. is the first to develop such a computer.

“Equally important is to make sure that America’s financial system, critical infrastructure and national-security agencies are fully quantum resistant. In a world of quantum proliferation, the risks are too great to ignore,” he notes.