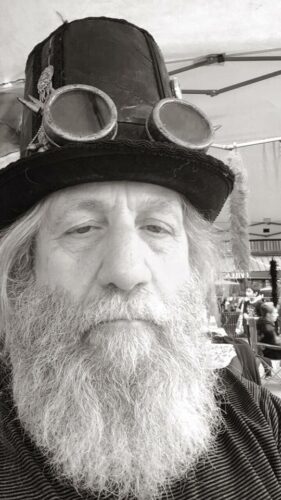 As founding pastor of “The Gathering” in Salem, Massachusetts, Wyman reaches out to disciples of the Dark Arts, both dabblers and druids.

All this month, thousands of tourists and a gaggle of witches – whether shamans or shams – descend on Salem, a mecca for sorcery in America, for something of an open-air conference and festival called Haunted Happenings that culminates in Halloween.

Wyman, 59, hosts bands playing music and booths where Christians soft-pedal the gospel. He hands out hot chocolate and offers spiritual conversations for the curious. His followers, sometimes dressed as medieval monks, walk the town and ask forgiveness for the sins of the church, the inquisitions led by the colonial Puritans.

When Wyman sees a witch, he doesn’t see Lex Luther. He sees a hurting soul who has fallen unwittingly in the wrong path. He recognizes that some resorted to Satan because they were rejected by church members. His is an interesting take on the old question of how, or if at all, Christians should celebrate Halloween.

“Christians have a National Enquirer view of pagans,” Wyman told Wicked Local of Salem. “They think they must be worshiping Satan or sacrificing babies. Or they view the pagan community as a well-organized machine that’s after the church. That’s a sad picture. In turn, because a few Christians have taken advantage of that to make money in the ’80s and ’90s, the pagans have a bad view of Christians. We want to break that.”

Unaccustomed to love from Christians, the witches appreciate Wyman. 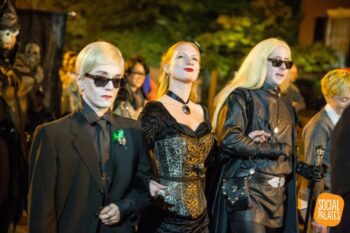 A warlock and necromancer, Christian Day, 46, praised Wyman’s style (in a quote nine years ago): “If ever there was a person that could make me want to become a churchgoing Christian it would be Phil — not because he’s tried to convince me that witchcraft was evil, or hell is fire and brimstone, but because he leads a life of honesty. He’s one of the most honest people I know, and I’m a psychic. I look at people and I see their dishonesty.”

Not all Christians understand his approach, saying it’s dangerous to fraternize with the enemy. 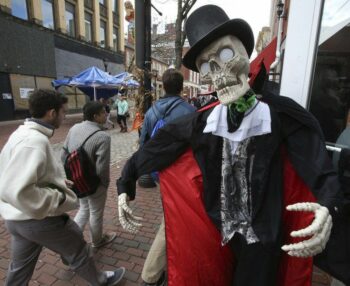 Early on in this ministry, Wyman was photographed pretending to kiss the hand of a vampire actress. It was an extravagant gesture, partly jest and thoroughly love. When it wound up on a neo-pagan’s website, Wyman’s church denomination defrocked him – even though he spent sleepless nights and oodles of hours futilely documenting his orthodoxy.

He didn’t originally want to become a loose cannon. But since being excommunicated, Wyman has come to embrace a role as an outsider of the church.

Today, it would be fair to call him Christianity’s preeminent outlier — a fringe phenomenon. His book “Burning Religion,” a takeoff of the Burning Man festival where he conducts outreach, eulogizes leaving religion without leaving Jesus. 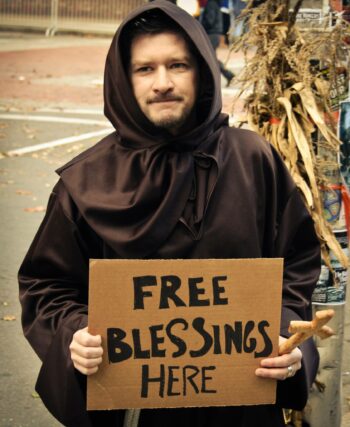 “My birthday falls on the same day as the reformer Martin Luther,” he writes facetiously on his blogger. “Does this make me someone who gets to be chased around like he is a heretic or is it just a weird coincidence?”

Some 200 supporters join him in the Salem outreach from all over the world. There are “dream interpreters” who appeal to this New Age generation. There are healers who pray for miracles. There are “Psalm” readers. Not every song played on Wyman’s “Fountain Stage” is overtly Christian. Their method is the subtlety of poetry, not a sledgehammer of truth.

Wyman calls this type of outreach “embedding” Christianity in the culture and points to a long history of apologetics that try to make the gospel palatable to non-believers, hailing from the early Christians who adapted the message to address the prevailing ideas of Greek philosophers in the 1st century.

It is common for pastors to talk about getting the gospel outside the four walls of the church. Wyman would blast down those walls with revolutionary fervor.

Ironically, it’s Wyman’s followers who get into shouting matches with militaristic street-preachers who descend on Salem to preach at the witches. The last thing witches need is more rejection from the church, they reason.

“I typically have to remind the costumed monks to remain peaceful, and not to get caught up in the shouting matches,” Wyman told Patheos. “But alas, that doesn’t always keep the emotions down.”

Wyman is building, not burning, bridges – or witches.

Wyman’s atypical outreach to the witches has gone on for 19 years. His successes in making inroads into the neo-pagan world has led him to take his show on the road. He’s now a regular at the Burning Man festival in the Nevada Desert, at Stonehenge for the Solstice and at the New Agey Glastonbury Festival. He hits about 20 festivals all year. 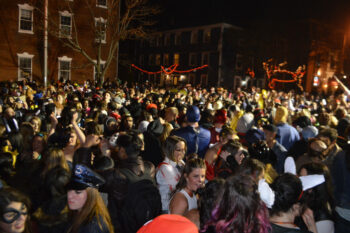 “Witches all over the world know us because I was persecuted like them. It’s kind of become our calling card: we’re the church that befriended the witches,” he said. “We stood up for them. They’re not eating children. They’re not trying to infiltrate your church.”

With a steampunk hat and a mellifluous baritone voice, Wyman comes off as an avuncular friend to anyone. He writes sonnets, smokes cigars and indulges a host of activities that might be frowned upon by uptight Christians. He’s learned to weather the criticism with a cultivated nonchalance. After all, his aim is to reach sinners, not play up to ecclesiastical standards.

A California native, Wyman studied theology at Escondido Bible College and Fuller Seminary. He first pastored in 1985 in Carlsbad, California. Then in 1999 he moved to Salem, Massachessetts, pop. 40,000, infamous for the 1690s witch-hunt that was vilified by Nathanael Hawthorne’s The Scarlet Letter and Arthur Miller’s The Crucible.

Almost immediately he launched the Halloween outreach, promising the city fathers they would eschew picketing and protesting. Instead, they would create carnival fun and offer free hugs.

“I was surprised how amenable the city was allow us to do whatever crazy thing we thought up, and it has only grown over the years,” he said. “We talk about Jesus, and are open about being Christians. It is all very gentle and graceful.”

Wyman relies on donations and grants to fund his more than 10,000 cups of cocoa handed out in Salem in the month of October – as well as his travels around the world to present the gospel in creative ways. To dedicate his energies full-time to festivals, he recently stepped down as pastor of the Gathering church, which is small at about 50.

“I don’t think I have the capability of converting anyone,” Wyman said. “I don’t look at the Christian salvation thing as a sales pitch. That’s God’s job. I talk about practical things. Why can’t I just have a regular relationship and talk about the Red Sox?”