Popular culture is awash in theories about alleged changes to the Bible that have corrupted its message and undermined its validity.

“That is one of the big objections that have grown in the past decade or two due to the work of Bart Ehrman, who is one of the leading critics today,” says Sean McDowell, co-author with his father, Josh McDowell, of the new edition of Evidence that Demands a Verdict.

The apologetics classic, Evidence, has been updated three times since 1972, but the last effort was 1999 — nearly two decades ago. The recent updating project involved several dozen grad students, at least 12 leading scholars from around the world, and a team from Thomas Nelson publishers.

“This book has been impactful and we wanted to get it right,” Sean notes. 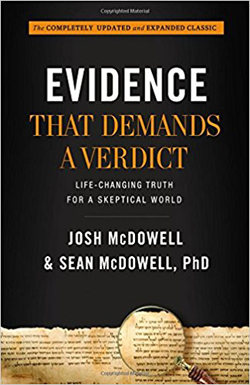 Some new issues tackled in the book include the claim that Christianity derived from pagan mystery religions, disputes about the historicity of the exodus, an examination of the martyrdom of the apostles, and the textual criticism raised by Bart Ehrman.

“I hear Muslims, Mormons, and agnostics all cite Ehrman’s material,” Sean says. “He looks at the variants across the different manuscripts and says we can’t trust with confidence what was in the originals and the Bible was changed in a willy-nilly fashion.”

The way to know any ancient book is trustworthy is to go back and look at the number of ancient manuscripts and the time interval between the original and the existing copies, he explains.

“What is remarkable about the Bible and the Gospels in particular is that we have far more manuscripts than any ancient book and they are far earlier than any other ancient book.”

Most scholars believe we have accurate copies of ancient works like The Iliad by Homer or the commentaries of Caesar about the Gallic Wars. “These are books people assume we have passed on reliably,” Sean notes – and no scholar would dispute them – but we have only a small fraction of manuscript evidence for them compared to the Bible.

“In Evidence we did an insurmountable amount of research, trying to get the most accurate information from around the world and document the kinds (of manuscripts) and languages of them and also to show how early they are.”

Sean and his team of scholars tallied more than 24,000 handwritten manuscripts of the New Testament in various forms. “It could be the size of a stamp, it could be a chapter or more,” he notes. “With technology today, even with the slightest piece, just a few words, we can reconstruct when it was written.”

The ancient manuscripts are in dozens of languages, including Greek, Latin, Slavic, Ethiopic, Armenian, and Syrian.

The oldest manuscripts are from the early second century and, possibly, late in the first century. “We do see minor difference in word order or spelling, but that doesn’t mean we can’t reconstruct with a high degree of confidence what was originally written down,” he says.

“Christians need to be aware of how strong the case is for the reliability of the Bible,” Sean notes. Both the integrity and the authenticity of the Bible is firmly established by the manuscript evidence, according to the McDowells.

Sean revealed that he had a personal crisis of faith as a teenager. “It was the mid 1990s when I had just started in college, and people had new access to the Internet on a widespread scale.”

As he surfed the web, he stumbled on something unexpected. The “secular” web was critiquing Evidence that Demands a Verdict chapter-by-chapter.

“I had never heard thoughtful critiques of the apologetics I had learned growing up,” he recounts. “It was unsettling at the time.” His parents had given him a measure of freedom and hadn’t overwhelmed him with religiosity.

As he wrestled with the critics, he realized: I can’t answer this…what if my parents are wrong; what does that mean for my life? How can I know?

While he never stopped believing, the experience helped him take his faith more seriously than he had before. “I thought someone was not a Christian because they hadn’t read my dad’s books,” he laughs.

After his own thorough investigation he concludes the critics’ arguments were “shallow and half-baked. I don’t buy them, but this is 20 years later.”

The latest edition of Evidence also includes a new section about “hidden coincidences” in the Bible, based on author Lydia McGrew’s work.

McGrew makes the case that there are undesigned coincidences scattered throughout different New Testament passages, notable connections between two accounts that seem unplanned, but fit together like pieces of a puzzle.

These coincidences are so subtle it would be extremely difficult for a fabricator to make them up. But they provide important evidence for the reliability of the New Testament, Sean says.

“The same is true about the resurrection. We see some further lines of evidence because a lot of scholars have been looking at it more closely over the past few decades. The traditional resurrection argument is even stronger than it was,” Sean notes.

Another new section in Evidence deals with the charge that Christianity was a copycat religion. “Some claimed Christianity was borrowed from these ancient pagan mystery religions…like Isis and Osiris and Mithras. That is such a popular claim now. It’s in the Da Vinci Code and Bill Maher’s book and the movie Religulous.”

Sean wrote a chapter in Evidence dealing with the early Christian martyrs based on his dissertation. “Did they really die as martyrs? What are the traditions? How reliable are they? And what evidence does this offer for the resurrection?”

“The fact that the early apostles were martyred shows the depth of their sincerity, that they weren’t making this up. They weren’t lying. They sincerely believed it was true.”

The younger McDowell is impressed by the work his father invested in the original Evidence. “For a year he typed it all out himself, spending hours every day on an old school typewriter. Nobody wanted to publish it at the beginning. People thought it would fail. Now every publisher wishes they had it.”