In drought-stricken Niger, Samira watched two of her children die from starvation. Now her two-year-old son Adamou*, born in a mud hut, was severely malnourished, his skin hanging limply from his bones.

But because of warnings from Muslim holy men in her village known as marabouts, and fearing angry spirits, she didn’t think she should visit the Christian medical clinic in Dantchandou, 22 miles away.

In fact, Adamou had never received any modern medical treatment, according to a report by Christian Aid Mission (CAM).

Samira had taken him to the marabouts, who made ritual incantations, recited verses from the Quran, and made attempts to contact spirits via plants and perfumes.

More than 80 percent of Niger’s people are Muslim, but they often combine Islam with other animistic rituals from their ancestors, according to CAM.

Samira received jolting news from one of the marabouts. “The native healer told me that the spirits are not happy about me, and that I have to pay with my children,” she told CAM. 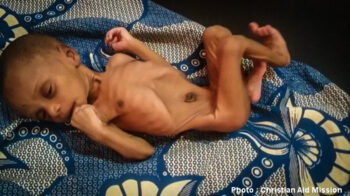 Samira’s neighbors urged her to take her children to the Christian medical clinic, and initially, she resisted their advice. But as her son continued to deteriorate, she was finally persuaded to make the 22-mile journey.

“At the clinic, she learned it’s just a problem of food,” the ministry director told CAM. “The child is malnourished. By the grace of God, he will be fine again. We referred him to a hospital for further management. We are following up on the case, and the mother says, ‘I’m very happy.'”

At the same clinic, a 19-month-old was suffering from protein deficiency that led to a swollen belly – along with anemia and diarrhea.

“One week after the admission, the mother ran away with the child to a marabout,” a medical missionary at the clinic told CAM. “She came back two weeks later, when the child was in bad condition.”

Another mother at the clinic was suffering from mastitis, a common breast inflammation during breastfeeding unrelated to the drought.

But because she couldn’t breastfeed, the condition of her baby went from bad to worse.

“The child cannot continue the breastfeeding because of the condition of the mother,” the doctor told CAM. “Therefore, the child is severely malnourished, and as usual the parents came very late to the health center after visiting several marabouts.”

Some Muslims seeking treatment at the clinic have put their faith in Christ and that word has reached the Muslim leaders.

“We were advised to come here with the child, but at first we refused, because we were told that once you come here, you will be Christian,” one woman said.

A medical missionary at the clinic said the Christian workers exercise gentleness and discernment in sharing the Good News.

“In our experience, most people are open to listening [to the gospel],” he said. “The decision to follow Christ may not come immediately, as some plant, and others water, and others harvest. Over here, it’s basically a one-on-one thing with lot of patience, as God does His work through their hearts.”

The drought in the Sahel region of West Africa that is threatening 13 million people, including a million children. As malnutrition rates reach 15 percent in Niger, Chad, Burkina Faso, Mali and northern Senegal, food prices in the region have risen 20 to 25 percent over the past five years and could reach 30 percent by August, according to CAM.