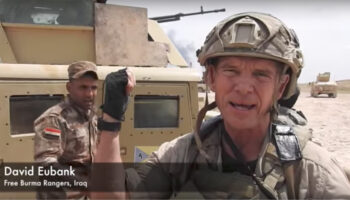 An American missionary braved ISIS gunfire to rescue a teenage girl trapped for three days under the rubble of her home in war-torn Mosul.

David Eubank, the founder of Free Burma Rangers (FBR), helped lead the daring rescue effort, which was captured in a video uploaded to YouTube on May 15th.

In 2015, FBR began missions to northern Iraq, sharing the love of Jesus, providing medical training on the front lines, doing children’s programs in the IDP camps –helping Kurds and Yazidis oppressed by ISIS.

In this rescue mission, 17-year-old Rahab was trapped under fallen concrete for three days, her leg crushed and life ebbing away due to blood loss and starvation.

On the video, gunfire can be heard as Eubank and his team move near her home, in an area controlled by ISIS.

A bomb blast apparently caused Rahab’s home to collapse, trapping her under large blocks of concrete.

As they got close to the collapsed house, Eubank prayed for protection in Jesus’ name.

Assisted by firefighters and the Iraqi army, they moved equipment close to the girl and began working to dislodge huge chunks of concrete on top of her.

Finally they removed enough concrete to pull her out, but danger still lurked from ISIS fighters. They had to elude enemy gunfire on their way back to the Iraqi army lines.

Eubank and others prayed with Rahab once more as they carried her into a military vehicle.

Then Eubank held Rahab’s hand and tried to comfort her as they traveled back to the base.

God answered their prayers, because they completed the mission without anyone being killed or injured.

FBR has also been involved in rescuing sex slaves in northern Iraq. “It is right to stop ISIS 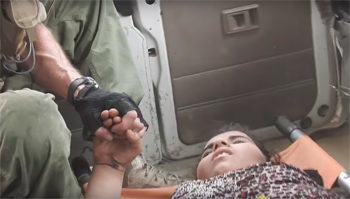 and rescue the thousands of girls and women held as sex slaves,” he notes on the FBR website. “It is right to stop their global acts of murder and terror.”

FBR has a two-part strategy: First, to set the oppressed free and defeat ISIS. Secondly, to share God’s love and mercy and open a way for change.

“We stand against ISIS and we’re also praying for the people of ISIS—and asking God for love for them. No one is beyond redemption: In Burma a regime soldier who once murdered villagers joined our team to help the same people he once attacked.”

When Eubank first saw the black flag of ISIS flying outside of Mosul, it drove him to his knees to pray that ISIS would be stopped, the Kurds and other oppressed minorities would be set free, and that God would change the hearts of the enemy.

“Fighting evil and grounding our actions in love are practical ways towards defeating ISIS and uniting for a new way forward,” he notes.

For more about the work of Free Burma Rangers, go here