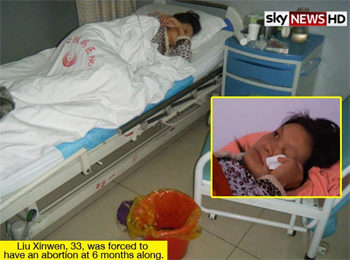 Directed by Chinese authorities, doctors performed more than 330 million abortions since the government began their “family planning” policy in 1971, according to official government statistics obtained by The Financial Times.

There has been much controversy and debate since China’s one-child policy was launched, with many forced abortions and sterilizations employed in the toxic program.

Christians and other human rights campaigners have decried the policy, with many paying a heavy price including incarceration by the government.

The one-child rule, with exceptions for ethnic minorities and some rural families, was officially launched in 1979.

Since the early 70s, doctors have performed 336 million abortions and 196 million sterilizations, the data reveal. They also inserted 403 million intrauterine devices, a common birth control method in the West but one that Chinese officials often forced on women, according to The Financial Times.

The government estimated that without the one-child policy in place the population would be 30 per cent larger.

In the US, about one-fourth the size of China, approximately 50 million abortions have been performed since the Roe vs. Wade Supreme Court decision legalized abortion in 1973.

Some economists say the family planning policy will increasingly stifle economic growth. “This makes China’s population look more like a developed country than a developing one, which is a key disadvantage in labor-intensive industries,” Ken Peng, an economist with BNP Paribas, told The Financial Times.

The birth restrictions have led to an imbalance between men and women, with most families favoring male children and as a result, many unborn baby girls murdered in the womb. There are currently 34 million more men than women in China, which may play into China’s military policies.

During a recent session of the Chinese parliament, the government merged the commission that enforces the one-child policy with the health ministry. Some say this could signal a shift away from the harsh execution of birth controls.

“After the ministerial restructuring, the power of the family planning unit will be reduced,” He Yafu, a Chinese demographer, told The Financial Times. “It won’t have the ability to design policies and it will have less say in the country’s population strategy.”

One possible change to family planning rules would be to allow two children for parents who were both single children themselves. The policy is being tried in a few cities, he added.

But the voices advocating for removal of the policy are also meeting opposition. “The idea of easing the ageing problem by increasing the fertility rate is like drinking poison to quench thirst,” Yang Yuxue, the head of the family-planning unit told The Financial Times.