Behind the popularity, the beauty, and bubbly personality, Alison Henry harbored self-hatred and misery that led to broodings about suicide.

Today, the 23-year-old YouTube make-up artist with a following of more than 800,000 has found inner joy.

Born in Atlanta, Alison was raised in a Christian family, lived in a beautiful house, and had the right pieces in place to become successful. But during high school, her torments began as insecurities rose in her heart. She locked herself in her bedroom for hours and spilled expletive-laden bitterness into a personal journal.

She questioned her existence, felt like her life lacked direction and wondered if anybody cared.

“I would really wish I was dead. I did really mean that. It was my little secret.”

Alarmed by their daughter’s downturn, her parents sent her to a professional counselor who prescribed anti-depressants. The medicine didn’t work, she said. “I’m unfixable,” she glowered.

Trying to anesthetize the hurt, Alison turned to boyfriends, weekend parties and alcohol and drugs.

“It was a coping mechanism, but it never fixed things,” she said. “When you wake up, you’re as sad as ever.”

“For months I would say, ‘No, I don’t belong there. I’m not a church girl.’ I thought they were all like people who wore turtle necks and sang kumbaya around their guitar.”

Eventually, Alison caved in. Seeing hundreds of high schoolers lifting hands and singing to something invisible made her feel “weirded out.”

But “I didn’t understand it, and I couldn’t stand the thought of me not understanding something,” she said.

However, she decided to go back. During her third visit to church, God met her.

“I knew in my heart that the pastor was talking about me,” Alison said. “I can’t explain to you what happened, but I promise you that the feeling that I felt was the presence of God. The entire room went quiet. I did not hear anything except him talking. It was like I was underwater. Everybody in the room seemed to go away. I didn’t see anything except the pastor. I felt something that I never felt in my entire life. Obviously that was just the presence of God shining down, intercepting my life at that exact moment.”

She shut her eyes, and a weight lifted off her shoulders. She was crying and was afraid of being judged.

“I was freaked out,” she said. “But I was also like, ‘This is something supernatural that is happening to me.’ God just touched my heart that night like nothing I’ve ever experienced in my life.”

After leading people in a prayer of salvation, the pastor asked new converts to stand to their feet. Alison mustered every ounce of courage and stood.

She was bawling her eyes out. Everyone clapped. Her friends hugged her.

“From that day forward my life has never been the same.” Alison said. “That’s what Christianity is about, putting your life away for a minute and searching for truth and losing your unhappiness. God showed me what His love is. My life took a 180 from that day.”

Today, Alison has plans to complete a business degree at college and start her own business. In the meantime, she uploads videos of make-up tutorials and fashion.

She admits she’s not perfect and rejoices that God’s mercies are new every morning, as the Bible says.

“All my pain led me to God. I don’t know who I would be today if I hadn’t met God,” she said. “It’s hard to see people living without God. It’s been the most beautiful time in my life.”

An anonymous post on her Tumblr account thanked her about being open about God because that helped her overcome her own isolation due to an alcoholic father and out-of-state mother. 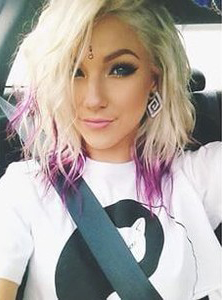 “I never thought being connected with God was important until I saw how much He means to you,” the blogger wrote. “I started going to church and praying more and found happiness. I’m going to college and away from the things that bring me down. Without you, I wouldn’t be here.

“If you’re feeling lonely, if you’re feeling empty, if you’re feeling like you have no purpose in life, to be blunt, you are so wrong. You do have a purpose. You have a plan. God has everything just wired out for you in His mind,” she said. “He’s just waiting for you to step out of your comfort zone just to find Him. God is seriously stretching out his hand. God is asking you into a relationship and all you have to do is say yes.”