He grew up in a Christian home with loving parents, but something went terribly wrong in his teen years that caused a slow but steady descent into addiction. Then God sent a powerful dream about hell that awakened him to his need for change.

“They were great parents to me,” says Billy Miller. “I knew the truth of the gospel. I played sports. I was a great football, baseball player and basketball player. I had a good childhood,” he recalls.

He grew up in an affluent neighborhood in Arcadia, California and later, Scottsdale, Arizona. Everything looked good on the outside. The family went to church together on Sundays and Billy attended youth group on Wednesday nights.

“I believed in God and I knew there was a God, but I didn’t have a relationship with him,” Billy admits. “I never prayed. I never read the Word. I didn’t have a foundation in Christ.”

At the same time, he was intrigued with the world. “I started to fall into pornography at 13. I was very addicted to it. It was like a drug. I was ashamed but I couldn’t quit,” he confesses.

Little sins led to bigger sins. At 15 he smoked his first cigarette. Then it was drinking with friends, sometimes after games. “We went out and partied and played beer pong,” he recalls. “The six pack turned into a 12-pack and that turned into hard alcohol.”

Friends gave him marijuana, Adderall, and cocaine. “Here I am the all-American kid and at 17 I was an alcoholic, drinking every day with my friends, even before school. It was getting out of control; I couldn’t stop,” he says.

“I was trying to feel happy by filling the emptiness with alcohol, pornography and pills. But it was like nothing would satisfy me. It would satisfy me for a season of time but not a long period of time.

He found himself sliding deeper into a quagmire, undermining body and soul. “You do drugs and then the next day you wake up and the high is gone and you feel worse. I would wonder who I had become.”

Then he dropped out of sports. “I was a very good basketball player and had a scholarship offers from smaller schools. I could have gone to a smaller school on a full ride,” he notes.

“Why are you quitting? You’re a great player,” people said.

“I don’t want to play,” was his sheepish reply.

At 17 a dentist prescribed pain pills and Billy discovered he loved the feeling. “After my prescription ran out I got more and I got addicted to pain pills worse than alcohol,” he says. He began using Xanax, OxyContin and Ecstasy regularly. “It was getting out of hand my senior year. I was hiding it and not many people knew it, which is crazy,” he recalls.

After graduation from high school, he attended Northern Arizona University, but flunked out after his first year because of his unrelenting addictions.

Back in Scottsdale, he attended community college, got a job, and tried to quit pills. “I knew I had to get ahold of this. I knew people were dying from it and I knew where the end would come if I kept using the pills.”

After he moved into an apartment with friends, he discovered a neighboring apartment was like a pharmaceutical shop, offering anything an addict might want. “It was always in my face. I was right back to it.”

Financial troubles were also mounting, due to his addictions. “I was spending $20 per pill for 30 mg of OxyContin; I was spending $200 a day on pills.” He made as much as $200 to 300 per night working at a restaurant, but spent it all on pills.

Then an acquaintance convinced him to save money by switching to heroin. “He said pills are way too expensive so why don’t you try heroin. It’s cheaper.”

“You never think when you party with your friends at 16 or 17 it will lead to black tar heroin,” he laments.

Physically, the drugs were also taking a toll. “I was so sick. If I didn’t have heroin or pills I would sweat or throw up. It got out of control. My life was getting destroyed. I got kicked out of my apartment because I didn’t pay the rent. I moved to a drug house in Tempe and lived on a couch. I lost everything. My life was completely destroyed because of my choices. I wanted to quit but I couldn’t.”

At the depths of his pain and sorrow, Billy cried out to the heavens: “Here I am God, living on a couch, drugged out of my mind, a mess, my life is becoming destroyed. I have nothing. If you love me, you need to help me please!”

God in His infinite mercy heard Billy’s prayer and moved on his parents’ hearts to launch an intervention.

The day after his prayer, Billy’s parents called him and asked him to come over to his grandmother’s house. When he arrived, he found his family in despair over his condition, completely heartbroken.

Billy began to spill his guts and confessed his problem to them. “I can’t quit. I don’t know what to do,” he said, tearfully.

His parents, Bill and Andra, convinced Billy to enter a 14-month program run by Teen Challenge. The night before he entered the program, God sent Billy a powerful dream about eternity.

Chastened by the vivid dream, Billy entered Teen Challenge with a hope for sobriety, but skeptical about the program. His first impression is that it was “a cult run by Jesus Freaks.”

Slowly, God put on his heart the need for repentance. Because of the powerful dream about eternity, he didn’t want to die in sin and rebellion.

He wrestled with God, caught somewhere between heaven and hell. “I didn’t really want to surrender. I still loved the world. I thought, I won’t use drugs, but I can still drink a little and smoke a little.

“The Lord kept bringing up that dream. He was also convicting me.” The program Billy entered at Teen Challenge was rigorous, with Bible study every morning, Scripture memorization, Bible homework, chapel services twice a day, “just Jesus, Jesus, Jesus,” he says.

Finally, God broke through Billy’s remaining walls of resistance. Are you going to come to me now? the Lord impressed on his heart.

“I guess I should, huh,” he responded.

Billy reached the point of surrender at a chapel service. I thought, I don’t want to have 10 more years of pleasure and then go to hell. I would rather have Jesus and inherit everlasting life.

He bowed his head and began to pray: “Lord, I want to give my life to you. I want you to help me overcome this 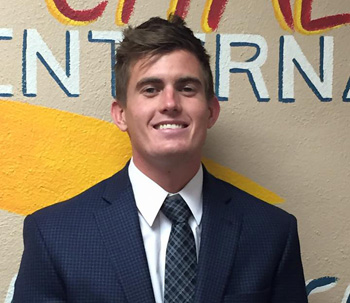 junk in my life. Lord, please give me your grace. I want to give my life to you fully. I want to repent.”

Then an indescribable, powerful wave from above descended on Billy. “The Lord’s love came over me,” he says. “I started to weep. God’s kindness led me to repentance.”

He reflected on the fact that he had been living on a couch a short time before, doing drugs, stealing from people. “I was a loser in society and God Himself was saying to me, I love you.”

In the days and weeks ahead, a transformation began to unfold. “God began to change me, and the Holy Spirit came in and filled me with His presence and God started to mold me into his image. He began to transform me through His Word,” he says.

“The Lord has changed me 180 degrees. Now I look like a normal guy, you would never think I was a full-blown drug addict. His love changed me. He gave me the power to overcome sin. I haven’t touched a drug in three years. I don’t even smoke anymore. I don’t have a craving for that stuff. It’s only because of the Holy Spirit.

A year ago, Billy became a missionary to Romania through a family friend, Darius Zaharia, the founder of Jesus 4 Romania. “What we do over there is preach the gospel, the freedom of Christ, tell them what Jesus can do,” Billy says.

The church Zaharia planted in Orsova has 90 members and had 49 salvations this year. “They are from the world, prostitutes, drug addicts, people from all walks of life,” he says. They are launching a second church in the neighboring gypsy village of Eselnita.

“There is a lot of prostitution and alcoholism. We know God is going to change hearts over there. We feed 30 gypsy kids every day. These kids are broken, don’t have parents who love them. They are very poor, have no showers or hot water and live in poverty.”

“It’s a miracle I’m alive,” Billy says. “I should have overdosed from all the drugs I did. God had mercy on me.”

To know more about a personal relationship with God through Jesus, go here