He hadn’t set foot in church for 12 years, but got caught up in the revival that hit Burlington, North Carolina this year and became one of its primary evangelists. He’s been preaching almost every night since the revival “officially” ended, but God is still moving and many are responding.

“We’ve seen over 300 people saved over the last 4-6 weeks,” says D.R. Harrison. “All the sparks from the Burlington revival have overflowed and broken out in other areas. People are getting saved, people fired up for God. It’s been amazing to see what God’s been doing.”

Last May revival arrived in Burlington at New Hope Baptist Church and lasted through July. Pastor Randy Hobbs had invited evangelist C.T. Townsend to spend a week in his church, and as the power of God fell many were saved and the revival stretched on in a borrowed tent that held 3500 people — filled to capacity every night.

D.R. Harrison happened to own a video production company in Burlington. A few weeks into the revival, he was surprised to receive a call from evangelist Townsend, who wanted editing of some videos for a message.

His video editing led to a dramatic encounter with God. “For the first time in 12 years, the Holy Spirit started dealing with my heart while editing those videos,” he recounts.

On his smart phone, Harrison began to watch a live stream of the revival service and the power of the Word and the Spirit overwhelmed him. He got down on his knees and cried out to God for salvation.

He was born again and “everything I had been taught in my youth made sense for the first time,” he says.

C.T. Townsend allowed Harrison to share his testimony at one of the events, which led to many more speaking

engagements as he answered God’s call to share the Gospel.

“The only reason the (revival) meeting shut down (in July) is because we couldn’t keep the tent any longer. The man needed the tent back.”

“On the last night of the meeting 62 were saved. The tent was packed full. The power of God was so real. It was just unbelievable. It broke our hearts to shut it down. We tried every angle to keep it going,” he says.

However, a new tent to accommodate 6500 people is currently being made and will be completed by February 2017. They hope to set it up once more in Burlington and re-launch the revival meetings in May.

In the mean time, Harrison and Townsend are preaching somewhere almost every day, all over the country. “We are keeping the revival fires burning and praying God will continue to move across the country and save a bunch of souls before he comes back,” Harrison says.

“It is amazing to see what God has done over the last six months. It’s overwhelming.

“In the midst of all the bondage and sin and the negativity (of the election) there is a group of people God is raising up to spread the good news of the Gospel.

“Our only hope is in Jesus. There is no hope in anything else. We’re trying to follow him and let him lead us and guide us. There are people being saved every day.”

Last Tuesday night in Georgia Townsend preached and 18 were saved. Last week Harrison saw 34 saved at two churches in North Carolina. “It’s not just kids getting saved,” he notes. “It’s all ages walking down the aisle putting their faith in Jesus Christ.”

Harrison often tailors his preaching to people sitting in the pews who lack passion for God. “My message God has me preach a lot is to lost church members who claim to be Christians and have no fruit, live one way in the church and one way outside of church.

“We’ve tried everything — programs, religious traditions, tried doing everything in our power to change ourselves and be better people, and nothing has worked, and people realize the only person that can change their life is Jesus Christ and putting their faith in him.”

There is urgency in Harrison’s worldview. “Time is short. Time is very short,” he says. “We’ve heard preachers preach that our whole lives. I grew up hearing that, but now is different,” he maintains.

“Everything in the Bible prophecy-wise has been fulfilled. The next step is the rapture. Right now God is extending mercy. He is pouring out his spirit on all flesh. He is getting as many people into the family of God as he can. It’s not going to be too much longer before God will tell his Son to ‘go get your bride.’

“We have to do everything we can to reach as many people as we can as quickly as we can.”

With many disillusioned by the current political season, he sees openness like never before. “What I am seeing is people hungry for God, they are hungry for God to move, hungry to see him do something here in America.”

Harrison is careful to keep his ego in check about what’s happening. “It is all God,” he says. “It’s not CT or me, any ministry or anybody else. Every bit of it is all God.

Nobody can take credit for anything. It’s all been a holy God and his sovereignty. When you try to analyze it, it’s only God.”

He says it’s an honor to be part of such an outpouring. “It’s very humbling and very overwhelming. It’s a great responsibility. You don’t want to say or do anything that would grieve the Holy Ghost or do anything that would jeopardize God’s hand being on your life. You have to walk very humbly and very sensitively. You have to be very careful to give God all the glory. Any bit of pride can shut down what God is doing. It’s all been God and it will all be God.”

Harrison is critical of the programs that dominate some churches. “We’ve gotten so used to our programs. This is where people have missed it,” he believes.

“We go to church, have a couple songs, a bunch of boring announcements, you have clubs and car washes and bake sales and orchestrated songs, and the preacher preaches a three-point boring sermon he threw together out of a book the night before and there is no power of God. 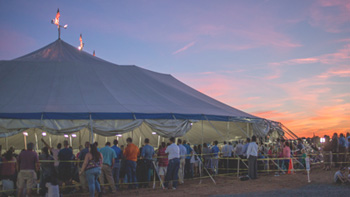 Harrison and Townsend have kept up a rigorous pace with their preaching, making sacrifices with time. “We will go every day, day and night; we will preach until we can’t hardly hold our heads up,” he says.

As a result of the pace, he’s felt a measure of spiritual warfare. “There is a spiritual attack; there is a physical attack. I’ve been preaching the last week without a voice. My vocal chords have been attacked by sickness. The devil will use negativity, skeptics; there are a lot of skeptics out there to tear you down. But you have to walk daily with God and stay on your knees,” he says.

In North Carolina revival God saturated one town with His presence