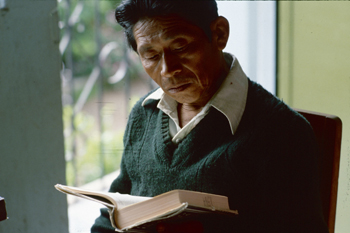 (Note: the story of Silverio Lopez was first told by William Cameron Townsend, the founder of Wycliffe)

Silverio Lopez was one of the few in his village who understood a little Spanish. When he went to work in Guatemala City, he bought a Spanish Bible. But it was filled with so many words he couldn’t understand that he put it away and forgot about it.

Soon he faced a health crisis at home and was forced to return to his village. One of his children died and another was very sick. Desperate for help, Silverio visited the village shaman. The shaman blamed the sickness on the spirits of dead ancestors and told Silverio to buy candles and light them in front of a certain image in the Antigua church. Silverio followed the shaman’s orders, but was soon in heavy debt.

One day Silverio found a scrap of paper on the road. He picked it up and read, “My Father’s house should be called a house of prayer, but you have made it a den of thieves.”

When he got home, he looked up the verse in the Bible. Convicted by what the Bible said, Silverio decided to stop paying the shaman and to quit taking candles to the church. Instead, he went to the doctor and bought medicine that soon cured his daughter’s stomach. Then he went to the Antigua church and talked to the Guatemalan pastor, who told him how to believe in Jesus.

Silverio surrendered his life to Christ and soon became an evangelist to his own people! Just six months after accepting Jesus, Silverio had already led 40 Cakchiquel Indians to Christ. His life was so drastically changed that he couldn’t help but share his newfound love with everyone he met, and his passion continued to spread.

Silverio wasn’t the only person “Cam” Townsend met whose life was changed in a big way. One day Cam met a shoemaker who had once been an alcoholic, but who had abandoned the bottle for Jesus. “Before I was a believer, I was thrown in jail 63 times for drunkenness,” he told Cam. “Now I’ve been behind bars three times for preaching the gospel.”

Cam also met a Cakchiquel Indian man who had gone to the president of Guatemala to complain about Cam’s work among his people. When the president met the man, he asked the man if he could read. The man said yes, so the president handed him a copy of the Cakchiquel New Testament that Cam had given him.

This is wonderful! God speaks our language! Where can I get a copy of this book?

After reading a few lines, the man looked up in amazement. “This is wonderful! God speaks our language! Where can I get a copy of this book?”

The president told him, “From the people you were complaining about.”

The man returned home, bought the Bible in his own language and became a believer. Someone later told Cam, “Now he goes everywhere, telling people that the president evangelized him.”

People like William Cameron Townsend, Silverio Lopez, the shoemaker and even the president of Guatemala didn’t let the change stop with them. They didn’t keep their passion and excitement to themselves, but rather shared with the people in their lives about Jesus. Because they took bold steps of faith, they were able to touch the lives of many people.

Change can start with just one person!

To know more about a a personal relationship with God, go here