It was compared to a ‘Garden of Gethsemane,’ improbably set in the midst of Hollywood near the Capitol Records building. Built in 1934 on the venerable A.G. Bartlett estate known for its gardens, it had 150 mature trees surrounding its gleaming white facade. The clapboard sides resembled a Southern mountain church, with a steeple that soared high above the front entrance.

The man who built the church, Dr. William Hogg, had a nervous breakdown after World War I, but soon followed a calling from God as a Tennessee circuit preacher with a pioneering vision for Christian radio ministry. Indeed, the leafy site he chose on Argyle Avenue became the first radio church built on the West Coast, and the second or third in the nation.

It’s knotty pine interior and 100-year old oak pews were graced by speakers such as Billy Graham, Roy and Dale Evans, and Bill Bright. Dr. Hogg created a radio show, “The Country Church of Hollywood,” that was heard coast to coast on CBS radio from 1934 until 1966.

Dr. Hogg created a radio drama set in the mythical rural community of “Goose Creek.” Dr. Hogg and his wife played the roles of a country pastor and his wife, Parson Josiah and Sister Sarah. “Meetin’ Time” was highlighted with hymns followed by a message from the parson.

Bettie Brown grew up across the street from the church property before the church was constructed. “They put up a big tent and we were curious and went over there,” she says, recalling events in 1933.

“People used to come all day and they could buy sandwiches and pie and cold drinks, stay all day and enjoy the grounds and wait for the evening service. In the tent they had a contest on who could say the books of the Bible in one breath. If you could say it you got a Bible. Those were special times,” she says.

Brown enjoyed listening to the Goose Creek Quartet in the tent. “Sometimes Josiah sang with them, “We shall rise,” and they (the Quartet) sang “Hallelujah.”

Brown’s father was one of the volunteer carpenters who helped build the church the following year. The 250-seat chapel was constructed almost entirely from donated materials.

The dedication was attended by actor Lionel Barrymore, with a message read from President Franklin Roosevelt, followed by singing and speeches.

Brown became the voice of Mable Gupton for the Saturday morning broadcast, which featured eight children in “The Little Red Onion School House.” Their schoolteacher was Miss Peachy Applewhite, played by Martha Hogg, the daugher of the founders.

“We had a script but there was always a message in it,” Brown notes. “Sometimes Parson Josiah would come by to see how all the children were doing. It was part of the show but he always had a thought he spiritualized.”

As befits its Hollywood location, the church had its unusual elements. “Instead of a regular pulpit it had a sound stage,” Shari Mehr recalled in 2001. Mehr was involved with the church for many years and fought for its preservation against those who wanted to raze the church in the 90s and redevelop the valuable underlying real estate.

“It was all sort of make-believe,” Pastor Richard E. “Dick” Brown said in 2001. Brown got involved with the church after World War II as part of the Goose Creek Quartet. “On the radio show we pretended we were part of a little town in Tennessee.” Even off the show, Brown said the Hogg family members were always called by their radio names.

The Hogg family controlled the church from the beginning, never allowing its supporters a role in decision- 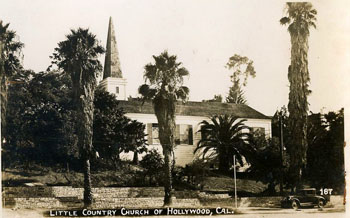 making, or to become actual members, according to Brown. No one could join the Country Church, since technically, it was a para-church organization.

“As a pastor for 50 years, if I had known then what I know now, I would have been appalled,” Brown noted. After his involvement with the Country Church as a singer, he went on to pastor churches in Texas, Oklahoma, and California. Brown passed away in 2011. 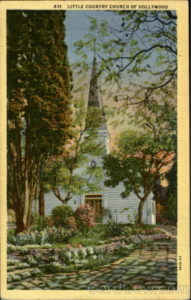 Brown believed the property ownership should never have been in the hands of one family. “I put my head in the sand, which wasn’t right,” he said.

After the founder and his wife died, the church began to dwindle in the hands of surviving family members. As attendance fell in the 90s to 25 on Sunday mornings and bills mounted, the surviving trustees decided it would be difficult for them to maintain the church.

“They kept firing pastors who wanted to evangelize the neighborhood,” Mehr said. The trustees quietly placed the property on the market, but didn’t publicly advertise a sale.

Leaders and pastors of the church were stunned in 1997 to learn the church was being sold. Helping the case of the preservationists, who fought the sale, the City of Los Angeles had declared the site a historic and cultural monument in 1992.

“The Hoggs made promise after promise that ‘the church will always be here until Jesus returns,’” Pastor Brown noted. “It was quite a shock when the Country Church came to an end.”

But the sides fightiing over the future of the church would not attempt to resolve the timing of Jesus’ return in court. “In order for the court to resolve this it would have to determine that Jesus actually has been here and whether or not he is coming again,” one of the attorneys stated in 2001.

In the midst of the legal dispute, the by-laws of the Country Church disappeared. “The by-laws were kept in Martha Hogg’s house and her house was ransacked,” Mehr recounted.

Even though the church held its last service in 1997, and ministry operations ceased, someone continued to send out fundraising letters which implied the ministry continued, according to Mehr.

The Church sat empty until Christmas Eve 2007, when it burned down – apparently due to malicious arson.

Bettie Brown still cherishes fond recollections of the church’s heyday. “I loved Sister Sarah. I would go back and sing at the church. Rudy Atwood could play for me and the quartet would sing. People came from all over the country and the church was filled on Saturday mornings. I had many wonderful happy memories there.”