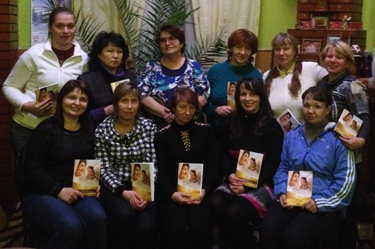 Irina had a difficult life as the lone bread-winner for her three kids—and the wife of a man who spent money wildly. As a result, the family was deeply in debt and she was angry about her depressed circumstances.

One day after she returned from work her neighbor Valya approached her with a surprising message: “God loves you and He will change your life if you begin to trust Him,” she said, according to a report by the JESUS Film Project.

“This seemed impossible to me,” Irina thought. “I didn’t see any way out; I had so many debts to pay!”

Then her neighbor invited Irina to a meeting for women that involved studying the Bible. “I told her I had no time for such meetings.”

But God had a way to penetrate Irina’s hardened, indifferent heart.

The next day she fell very ill with a fever. She began to hemorrhage and was rushed to a nearby hospital.

“On the way to the hospital I remembered my conversation with Valya and began to pray, asking God to help me,” she told The JESUS Film Project. “I promised that if He helped me, I would come to Valya’s group for women.”

But something amazing happened on the way to the hospital. God answered her prayer and miraculously healed her!

“When the doctors examined me, they didn’t find anything wrong and sent me home,” Irina reports. “God had healed me… but I didn’t realize it at that moment.”

During her return from the hospital, she remembered Valya and went to visit her. They watched the film “Magdalena” together. The movie tells the story of Jesus as seen through the eyes of four different women: the Virgin Mary, Mary Magdalene, the Samaritan woman at the well, and Elizabeth.

“It was when I saw the part about the woman who had suffered from bleeding for 12 years that I realized it was God who healed me!” Irina says.

Irina’s heart had softened. She reached the point where she was ready to surrender to Jesus Christ as her Lord and Savior. “I realized that my old life was like dirty water in a well, and if I allowed the Holy Spirit to rule my life, it would become a clean fountain. I was ‘knocked over’ by this revelation. I repented before God, and He took the throne of my life!

The change in her life has been dramatic. “Now I’m afraid even to remember what kind of person I used to be—how much anger there was in me! My life is getting better now, and though at times it’s still difficult, I see…that God won’t leave me alone.”

If you would like to know God personally, go here

Find out more about The JESUS Film Project here