By Ecem Meric and Mark Ellis

A full-scale replica of Noah’s ark will voyage from the Netherlands to Brazil to be seen by tourists at the Summer Olympics.

The ark, a 3,000-ton vessel covered with wood planks, was finished in 2012 and floats at a dock in the Netherlands. The 450-foot long ark was the brainchild of millionaire contractor Johan Huibers, a Christian who has received 3,000 visitors a day to see and hear the story of the flood.

It is similar to an ark built by the Ark Encounter in Williamstown, KY. But that vessel, a project of noted creationist Ken Ham, rests on dry land.

By contrast, the Dutch exhibit floats at sea and is sea-worthy enough to make a 5,000-mile trip, assisted by tugboats, across the Atlantic Ocean. After making port at various cities in Brazil for two years, the ark will sail around the world and spread the gospel message everywhere it docks, Huibers said.

The Ark of Noah Foundation in Pasadena, California is organizing fund-raising for the initial sea journey.

Huibers caught his vision for building the ark after he dreamed that his native Netherlands was overwhelmed by flooding from the sea. A strong believer, he decided that building the ark would be a powerful witness to the public.

The boat is as tall as a five-story building and longer than a football field. It could hold 5,000 people at one time

and cost Huibers $1.0 million to build.

According to the Foundation, Huibers will eventually make four stops along the U.S. coast at San Diego, Long Beach, San Francisco and Seattle. Prior to those four ports, it will visit Montevideo, Buenos Aires, Havana, Panama and Colombia.

Inside the ark are full-scale animal reproductions dispersed in cages and corrals on three decks. There are replica giraffes, elephants, lions, crocodiles, zebras and bison, among other animals. Museum displays tell the story of the Genesis Flood, the promise of the rainbow, the problem of sin and the hope of the gospel. There’s even a movie-theater inside this ark. 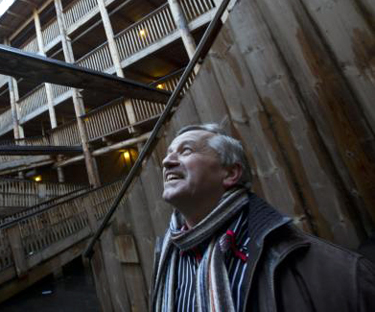 At 95 feet wide, 450 feet long and 75 feet tall, the behemoth roughly follows the Biblical specifications of cubits, which were an inexact measure of a man’s arm from the elbow to fingertips: 300 cubits, by 50 cubits, by 30 cubits.

“We are so pleased with the very warm support of the private community in Fortaleza, our first stop in Brazil after crossing the Atlantic Ocean,” said Herald Janssen, director of the Ark of Noah Foundation. “The target is to reach Fortaleza in July, and reach the Paraolympic Games 2016 in Rio de Janeiro by Sept. 7.”

Ecem Meric is a student at the Lighthouse Christian Academy.