Guillaume Bignon grew up in a nominal Catholic family outside Paris, but stopped going to church when he recognized he didn’t believe “any of it.”

“I hated God and I hated religion,” he told CBN. He had succumbed to the “default position” in France that there is no God. “Nobody spends much time thinking about these issues and neither did I. I was pursuing my happiness and pleasure in life.”

Bignon excelled in school and graduated from a respected engineering school, securing a position as a computer scientist in finance. On the weekends, he travelled the country playing volleyball as part of a national league.

“One of the French ideals of my age is to have feminine conquests,” he told CBN. He felt no guilt about his unrestrained sexuality.

But in the midst of his carefree lifestyle, God unexpectedly broke into his life through an unplanned encounter.

On vacation with his brother on the island of St. Maarten in the Caribbean, they decided to hitchhike home from the beach.

“A car pulled over. Two young women visiting from America were lost and needed directions to their hotel. Incidentally, it was right next to our house, so they gave us a ride,” Bignon told Christianity Today.

“They were attractive enough that my radar went off immediately, and we started flirting. The one I was interested in happened to mention she believed in God—by my standards an intellectual suicide. She also said she believed that sex belongs in marriage—an even more problematic belief than theism, if that were possible. Nevertheless, once the vacation ended, I returned to Paris, she to New York, and we started dating.”

Finding himself in a long distance relationship, his first priority was to convince his new girlfriend “out of her stupid beliefs about God” so they could be happy together.

To criticize Christianity, Bignon found a Bible and started to read the New Testament. For an atheist, he did something even more unusual – he prayed.

“OK God, I’m here,” he said. “And I’m looking into this Christianity thing. If you’re real, why don’t you reveal yourself to me?”

A few weeks after Bignon prayed, he injured the shoulder of his spiking arm, so he was unable to play volleyball 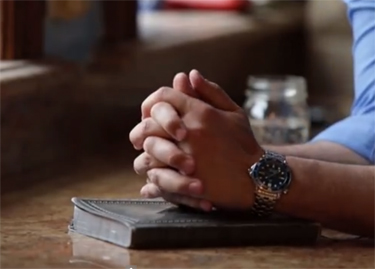 for a couple weeks.

With his Sundays available, Bignon decided to visit an evangelical church in Paris, to see what it looks like when Christians get together.

“I went there the same way you would go to the zoo, to see some weird exotic animals that you’ve heard about or seen in books but never seen in real life. I remember thinking that if any of my friends or family could see me in a church, I would die of shame.”

Bignon didn’t remember anything from the pastor’s message. “I figured I had seen enough and now I just need to escape. I literally had one foot out the door when I felt a strong wave of chills in my chest, going all the way to my throat, and grabbing me by the throat. I was frozen on the doorstep with chills all around,” he told CBN.

As Balaam’s ass was stopped in its tracks, Bignon froze, turned completely around, and walked straight toward the pastor.

He introduced himself and said, “So, you believe in God, huh?”

“Well how does that work out?”

The two went to his office and spent the next couple hours talking.

Bignon was clearly perplexed by the encounter. “Here was a man who was clearly educated and he knew what he was talking about. He wasn’t out of his mind. He was smart, careful and meticulous. He believes that God exists and Jesus was raised from the dead. I just couldn’t fathom it,” he told CBN.

Over the course of the next several months they met together and Bignon bombarded the pastor with questions.

As he reflected on their encounters, he nervously began to consider a horrible possibility – Christianity might be true.

His unbelieving prayer shifted slightly to: “God, if you are real, you need to make it clear so I can jump in and not make a fool of myself.”

Bignon began to hope for a dramatic mystical experience that would confirm his growing conviction, but what followed was “less theatrical and more brutal.”

God reactivated his “seared conscience,” which was not a pleasant experience.

He had cheated on his girlfriend regularly and suddenly the Holy Spirit convicted his heart about it. Alone with himself, he began thinking about all the things he had done in his life.

“I had also come to commit a particularly sinister misdeed, even by atheistic standards,” he confessed to Christianity Today. “Though I knew exactly what I had done, I had shoved it down inside. But God brought it back to mind in full force, and I finally saw it for what it was. I was struck with an intense guilt, crippled with chest pain, and disgusted at the thought of what I had done and the lies I had covered it with.”

But suddenly the wondrous good news of the Gospel dawned on him. “I realized, that is why Jesus died on the cross. It became a personal thing. He died to pay the price for my sins.”

He decided the time had come to place his faith and trust in Jesus, and asked Jesus to forgive him in the way Scripture promised he would.

Bignon says his “heart was set free and every trace of guilt flew away.”

He went on to receive a master’s in New Testament studies at seminary. In the process, he got married, had two children, and pursued further studies, earning a PhD in philosophical theology.

“This, in short, is how God takes a French atheist and makes a Christian theologian out of him,” he told Christianity Today. “I was not looking for God; I neither sought him nor wanted him. He reached out, loved me while I was still a sinner, broke my defenses, and decided to pour out his undeserved grace—that his Son might be glorified, and that I might be saved from my sin by grace through faith, and not by works. It is the gift of God, so that no one may boast (Eph. 2:8–9).”

“That’s the gospel, and it’s good news worth believing.”