Just before Bellevue’s 11 a.m. Easter service began with 3,500 attendees, a woman greeter noticed a man entering the church with a gun sticking out of his pocket. She told a nearby staff member, who radioed security.

Andy Willis, Bellevue’s director of security and a reserve officer with the Memphis Police Department, approached the man, identified himself as a police officer and directed him into a hallway.

“I figured this was a guy with a [concealed] carry permit who just … didn’t know that it was appropriate to hide [the weapon] if he’s going to carry it somewhere,” Willis told Baptist Press.

Donald told Willis he had a permit to carry the pistol and did not have any other weapons. Donald then agreed to let Willis put the gun in a backpack Donald was carrying.

When Willis opened the backpack he was shocked to discover a .300 Blackout assault rifle and “lots of ammo,” Willis said.

“I, of course, quickly changed mode,” Willis told Baptist Press. “I dropped [the backpack]. I put my hand on my pistol — I didn’t draw it. And I yelled at him, ‘Get down on your knees,’ which he did.”

But when another security team member arrived to assist, Donald jumped from his knees and sprinted toward the auditorium.

Willis gave chase, tackled Donald, and security team members handcuffed him and escorted him to an exit to wait for police.

Donald was is currently undergoing psychiatric evaluation, according to Baptist Press.

“When I saw the rifle, I thought, ‘This guy’s coming to do terrible stuff. I’m going to do what I’m supposed to do. I’m stopping him,'” Willis said. When Donald ran, he “was not trying to get away. He was moving as if he was headed to complete his mission.” 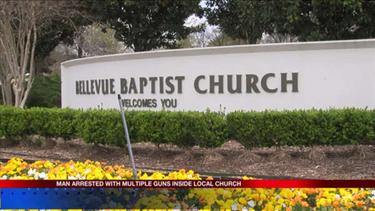 every seat in Bellevue’s Worship Center … this group also prayed throughout the church campus for God’s hand of protection to be on each person who visited Bellevue. We believe those fervent prayers were answered in light of the events Sunday morning.”

The Memphis police and the FBI are investigating the incident. Additional information will be released later, Willis said.

Since 1999, there have been 625 violent deaths at churches in the U.S., according to Baptist Press. Churches of all sizes should consider forming a security team to watch for suspicious behavior.

At Bellevue’s Easter service, 148 people received Christ, and most of the commitments were made at the 11 o’clock service.