At a celebratory parade in Bethlehem last week, young masked Palestinian children were dressed with “suicide belts” and equipped with “guns” and “RPGs”.

The celebration marked the 51st anniversary of the launch of the Fatah movement, the largest faction of the Palestinian Liberation Organization founded by Yasser Arafat.

Young children participated in the procession wielding toy weapons and “suicide belts,” according to a report by Palestinian Media Watch (PMW). The celebration was attended by top Fatah and PA officials.

“Children were seen carrying models of RPGs (rocket-propelled grenades) and explosive belts, and they all walked through the alleys of the refugee camp in the procession, during which the sound of songs of the national revolution were heard.” [Al-Hayat Al-Jadida, Jan. 8, 2016]

PMW has documented previously that a key part of PA educational messages to children is promotion of violence and glorification of terrorists. Many believe the cycle of violence in the Middle East will not end as long as children are schooled in terrorist ideology.

The Fatah movement recently expressed official support for Nashat Melhem, who killed 3 Israeli civilians at the beginning of this month in Tel Aviv.

page of the Fatah Movement and stated their “congratulations and may Allah receive you in Heaven.”

Fatah has also glorified Muhannad Halabi, who stabbed two Israeli civilians to death has been called a “hero” and honored as the one who sparked the “Jerusalem Intifada”:

The following is the report in the official PA paper on the rally with children holding weapons:

Headline: “Fatah marked the anniversary of the Launch in Bethlehem”

“The Fatah movement in Bethlehem marked the 51st anniversary of the Launch (Intilaqa) with a huge ceremony in the Deheisheh refugee camp yesterday [Jan. 7, 2015]. Thousands set out from three [different] places in processions that passed through a number of streets in the district and met at the Martyr’s Tower in the Deheisheh refugee camp, where a speech rally was held in the presence of Fatah Central Committee member Mahmoud Al-Aloul, Head of the General Intelligence Services Majed Faraj, Minister of Tourism and Antiquities Rula Ma’ay’a and dozens of the movement’s leaders in the district. 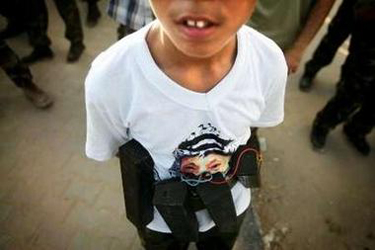 “At the head of the procession, which began at the President [Yasser Arafat]’s Airstrip at the top of the Zaher Hill in the Deheisheh refugee camp, stood masked men, and behind them walked children who wore black shirts with pictures of the deceased president Yasser Arafat and Martyr (Shahid) Jihad Al-Ja’afari, called ‘Gaddafi’, under the name ‘death squads.’

“Likewise, children were seen carrying models of RPGs (i.e., rocket projected grenades) and explosive belts, and they all walked through the alleys of the refugee camp in the procession, during which the sound of songs of the national revolution were heard.” [Al-Hayat Al-Jadida, Jan. 8, 2016]

Rodeo champ could stay on bucking broncos, but the Holy Ghost almost knocked him over