An Iraqi soldier who miraculously escaped from an ISIS prison in Mosul, Iraq, recounted the terror group’s ruthless torture of Christians, including burning many to death.

“They tortured the s_____ out of the Christians and some died in the process,” Karam Saad, a sergeant in the Iraqi military, told the Independent Journal (IJ).

“They would take some and lock them in a kind of casket, and set it on fire,” he added.

Saad found himself trapped in Mosul after the city of 2 million people was overrun by ISIS in early June, 2014.

“I was keeping a low profile in Mosul, my hometown, which ISIS had just captured – and still runs today,” he told IJ. 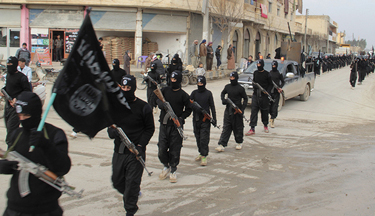 “They were killing people, taking them prisoner, they were very thorough. As I was switching from my uncle’s house to my aunt’s around 11pm at night, ISIS caught me,” he recounted.

His captors possessed a roster of people in the Iraqi military and found his name on the list. They asked if he was still loyal to Iraq, and when he said he was, they sent him to prison.

“I was taught by some of the best U.S. Marine Corps instructors in the world, so I am trained to handle very tough situations,” he noted.

However, he was unprepared by his U.S. trainers for the kind of torture employed by ISIS. “ They would use electrical wires on my back. They would tie a bag off around my neck and fill it with water, all in attempt to get something out of me.”

“All they give you to eat is one piece of bread and one apple a day. But you’re so scared to eat it, because you don’t know if they poisoned it or not.”

After a few days of this treatment, Saad began to plot his escape.

“I only spent three nights in prison. During that time, I paid attention to how many guards were on duty and any signs of weaker security.”

He scoped his cell for any possible way to get out. “The bathroom had a window with access to the roofs,” he said. “In Iraq, the rooftops are flat, so you can jump from roof to roof. Every once in a while, IS would speed off in their cars in search of more prisoners, and only leave a couple guards behind.

“So I stole a spoon and turned it into a knife, with the intention to kill one of the guards. I asked him to take me to the bathroom. But as I was making my way there, I noticed another guard who had been left behind was armed with a gun, so killing was out of the question.”

Then he opted for Plan B. “I went to the bathroom and managed to knock out the IS fighter and put him a rear-naked choke. Then I made it onto the roofs, and escaped.”

But sadly, Saad’s relatives faced dire repercussions after his flight. ISIS went back to his family’s home and beheaded his aunt and uncle and their children.

Even after this devastating personal tragedy, Saad continued to fight ISIS and was able to participate in liberating some of the sex slaves held by the terror group.

“We’ve liberated hundreds of sex slaves from ISIS. It’s the best feeling ever to save these girls. And it’s like you’re taking your home back.”

“It’s the most emotional moment as a soldier in your life. It hurts to see them jumping to kiss your boots. They treat it like a God has saved them, not a soldier.”