By Anthony Gutierrez and Mark Ellis

Because she got a drink of water from a “Muslim well,” Asayiya Noreen “Asia” Bibi has been jailed for five years and is awaiting her execution in Pakistan.

The 50-year-old Christian mother of three was picking phalsa berries under the blistering sun when her thirst compelled her to find water at a nearby well. A bitter Muslim neighbor charged that she “contaminated” the entire “Muslim well” of water by dipping her cup in for refreshment.

After her “infraction” in 2009, Bibi determined to defend her faith, something her Christian parents argued against because religious minorities do not fare well in Pakistan, which is 97 percent Muslim.

When Bibi was confronted at the well by other women challenging her faith, she said: “I’m not going to convert. I believe in my religion and in Jesus Christ, who died on the cross for the sins of mankind.” she recounted in her memoir about the incident, Blasphemy, which was dictated to her husband and then carried out of Pakistan by a French journalist.

“What did your Prophet Mohammed ever do to save mankind? And why should it be me that converts instead of you?” she asked. 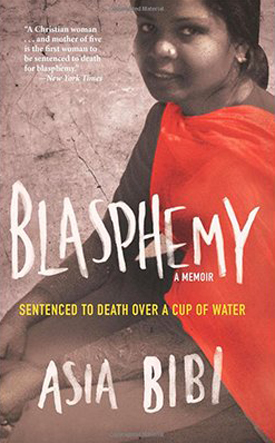 These words riled the other women at the well, who spat on her and beat her and stole her phalsa berries. They hurled venomous charges: “You’re just a filthy Christian! You’ve contaminated our water and now you dare speak for the Prophet! Stupid b____, your Jesus didn’t even have a proper father — he was a bastard, don’t you know that?”

Their confrontation offers a striking contrast to Jesus offering Living Water to the woman at the well.

Five days later, Bibi was picking in another field near her village in Central Pakistan when a mob approached shouting “Death! Death to the Christian!”

“Someone hit me in the face. My nose really hurt and I was bleeding,” she recalls. “They dragged me along, semi-conscious, like a stubborn donkey. I could only submit and pray that it would all stop soon. I looked at the crowd, apparently jubilant that I’d put up so little resistance. I staggered as the blows rained down on my legs, my back and the back of my head. I told myself that when we got to the village perhaps my sufferings would be over. But when we arrived there it was worse: there were even more people and the crowd turned more and more aggressive, calling all the louder for my death.”

The rioters turned Bibi over to a village imam who demanded she convert to Islam or die to atone for her blasphemy. Declaring her innocence, Bibi refused to deny her Savior. She was hauled off, nearly unconscious, to the police station in Nankana Sahib. The officer failed to treat her bleeding wounds and treated her with contempt. She requested they treat her wounds, and he threw a dirty rag at her.

“Don’t get your blood everywhere,” he sneered.

Since that day, Bibi has been in jail. Recent reports from her family indicate she has been vomiting blood and was refused medical attention, according to ASSIST news service.

An online petition for her release had surpassed half a million signatures, enough to embarrass Pakistani authorities, who have not carried out the 2010 death sentence but have left her languishing in prison. Some observers suspect the Pakistani government hopes she’ll die in jail, to appease local Muslims without angering foreign nations any further.

Meanwhile, two government officials who argued in her favor were shot and killed by extremists. Salmaan Taseer, the governor of the Punjab, and Shahbaz Bhatti, national minorities’ minister and the only Christian in the Pakistan cabinet at the time, were both assassinated in 2011.

“People who stand up for Asia Bibi in Pakistan put their lives at risk.” said Emily Clarke, who organized the petition for her release. “Two politicians were killed for speaking out against Pakistan’s barbaric blasphemy laws”

A Pakistani court found Bibi guilty of blasphemy under Article 295C of Pakistan’s penal laws, which impose a

“It is important we do everything we can to get real justice for Asia Bibi and save her life,” said Neville Kyrke-Smith, national director of Aid to the Church in Need UK . “We need the UK government and international community to get behind her plight as well as continuing to encourage the Pakistani authorities for a fair review of the case.”

International pressure may save Bibi from the gallows, but she is deteriorating in a windowless cell.

“I am the victim of a cruel, collective injustice,” Bibi says. “I’ve been locked up, handcuffed and chained, banished from the world and waiting to die. I don’t know how long I’ve got left to live. Every time my cell door opens my heart beats faster. My life is in God’s hands and I don’t know what’s going to happen to me. It’s a brutal, cruel existence. But I am innocent. I’m guilty only of being presumed guilty. I’m starting to wonder whether being a Christian in Pakistan today is not just a failing, or a mark against you, but actually a crime.”