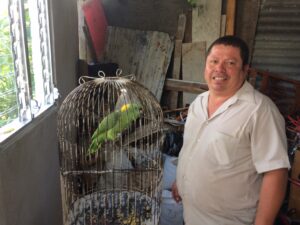 His dad was a philandering dentist, who plied a young woman with alcohol to take advantage of her.

From that unholy union, Douglas Barillas was born. He can’t remember a time when he wasn’t hungry as a child. He grew up with his grandparents in the poorest neighborhood in Guatemala City, El Gallito.

Neighbors paid him five cents to carry the trash to the public dumpster. It was enough for him to buy a hot, thick drink made of grains, a chuchito (similar to a tamale), and a couple bananas.

When there was nothing to eat, he would walk a few miles with his grandmother to his dad’s dentistry office to ask for five or 10 quetzals (Guatemalan currency). His dad, with a look of disgust and sometimes an insult, would give it to him.

Pain piled up in his heart.

When he was 12, his dad had a client come out and look at him. “Don Guillermo, this boy is not your son. Look at his eyes. They’re different,” she said. It was a greater humiliation than ever.

‘I threw the five quetzals in his face’

In school things didn’t go any better. One teacher rapped him on top of the head with a set of keys. “Nothing sticks in your brain!” she complained. A lump developed from her battering with the keys.

When his grandmother went to complain, the teacher told her that Douglas was mentally retarded and should be enrolled in a special education school.

But he slowly continued through the grades. By age 20, he had finished 6th grade in night school.

Faced with continual hunger, Douglas voluntarily resorted to child labor. He carried materials from the delivery truck upstairs for concrete workers building houses, a particularly strenuous task. He painted houses. He sewed artisan clothing in a sweatshop; he never knew the foreign tourists who bought his products.

His grandfather was a cobbler who wandered the streets looking for clients who wanted shoe repairs.

Grandpa was also an incorrigible alcoholic, so whatever meager income he made went to liquor. Neither the grandmother or Douglas could count on him for subsistence.

“I had a huge hatred in my heart,” Douglas recalls.

Other kids who grew up in similar circumstances became thieves, hired killers and drug addicts. Douglas tried to drown his pain with alcohol.

On his 15th birthday, his mother visited him. By then, she had given birth to six more children, almost all from different fathers. She was under incredible pressure to feed so many mouths; she herself faced chronic malnutrition.

It would seem that instead of coming to sing him happy birthday, she came to unload her own bitterness. She clutched him by the neck in a strangulation grip.

“She told me she hated me,” Douglas recalls. “She told me should have aborted me. She threw me down on the bed and I escaped to the streets crying.”

Since he was growing up, an uncle took him out and showed him what it meant “to be a man.” A practice common in Latin countries, the uncle gave him alcohol and paid for him to sleep with a prostitute.

“After that, everything I earned was for alcohol and women,” he says. “I became a womanizer and lived a loose life.”

When Douglas turned 24, he met Thelma, who became his wife.

The following year, his mother got saved and brought him to church. The power of God’s Word and the Spirit brought saving faith to his heart and he was born again.

As he began to grow in his faith, he decided he should stop drinking and womanizing. He began to treat his wife better.

Jealousy led her to salvation

But Thelma wasn’t quick to respond to the gospel. Initially, she only accompanied him to church to make sure he wasn’t with girlfriends – as she imagined – in the after-service fellowship.

“When he began to go to church, I was jealous,” she says. “So I went with him to keep an eye on him.”

Douglas encouraged some of the leaders in the church to visit him in his home. They spoke with Thelma about salvation, and she wound up accepting Jesus into her heart.

Douglas changed from one of the biggest drunks in El Gallito to one of the neighborhood’s greatest evangelizers. Gregarious with a huge grin, he would invite anyone and everyone to follow Jesus. To this day, the impression one gets going around the neighborhood with him on his motorcycle is that he’s a friend to all.

Douglas got a janitorial job at the General Hospital San Juan de Dios in 1997, a job he still holds.

He purchased a piece of land on the precipice of the canyon near the city’s dump and began building a cement and block house. His house looks like an eagle perched on a crag, so steep is the canyon. It looks like it will slide down with one of Guatemala’s torrential rains or earthquakes.

Through the years, El Gallito has become a drug-dealing neighborhood that cops are afraid to enter. Two cartels control drug trafficking from opposite sides; sometimes they fight, but usually they keep the neighborhood free from thieves and gangbangers, which are bad for business.

As strange as it sounds, El Gallito enjoys greater safety than many neighborhoods most of the time because the drug traffickers do a better job than the cops keeping extortionists and other crooks out.

But there are certain rules of going into the neighborhood. You drive in with the windows down. You wave to the young guys guarding the streets. Don’t dress like a hoodlum (no baseball caps or gang hair styles). Above all, get a neighbor to escort you. Police have erected street barriers blocking most entrances for the number of drivers who have gotten shot because they made a wrong turn.

A neighborhood ruled by traffickers

Douglas evangelizes the traffickers. He has done this with great tact and respect because they are power brokers. One such drug trafficker – also a hired killer — looked menacingly at him one day, so Douglas edged over toward him.

“I’m not afraid to die because I know where I’m going,” he said breezily. He led him through a presentation of the gospel, and the killer’s face softened.

“I know what you’re talking about,” he said, breaking down. “I accepted Jesus in prison.”

From that conversation, the criminal started going back to church and got out of crime, though unfortunately it was short-lived. He’s dead today, Douglas said.

Though his mom brought him to church 20 years ago, Douglas was never fully able to forgive her – until last year. After a spiritual retreat hosted by the International Fellowship of Christian Businessmen, he asked forgiveness for the bitterness he still harbored towards her.

“My son, I don’t have to forgive you for anything,” she responded, breaking into tears. “I’m the one who needs to ask you for forgiveness.”

They held each other in a long hug , sobbing, with tears. God was doing a work of healing after many years of painful memories.

Douglas, now 45, attends the Door Christian Church in Guatemala City. He has a son who plays worship, a daughter who works at Domino’s Pizza, and another special education daughter who just celebrated her Sweet Fifteenth birthday (Latin countries hold the big bash one year earlier than Americans). His father is dead.

“We don’t get to eat meat much, but God has blessed us,” Douglas says.