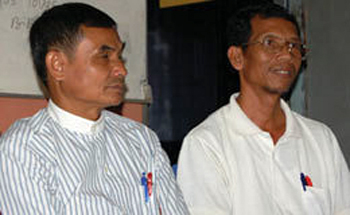 When the Khmer Rouge took over Cambodia in 1975, they forced people out of the cities, and sent them on forced marches to rural work camps for “re-education.” They demanded the entire population of 2.3 million vacate the capital of Phnom Penh within three days, including the elderly, children, monks, doctors and nurses, hospital patients, wounded and sick people, even mothers who had just given birth.

They said they would be leaving for a few days, but the evacuation turned into a three-year nightmare. Nearly everyone was either executed, faced starvation, or was worked to death. During their violent rule, 2.5 million perished — almost a third of the population — in what became known as the Cambodian genocide.

The horrific ordeal was memorialized in the award-winning Hollywood film “The Killing Fields.”

Christians living in Cambodia during the rule of the Khmer Rouge were heavily persecuted for their faith – even for reading the Bible.

By the time the Khmer Rouge were finally vanquished by Vietnam in 1978, there were barely any Christians left due to the brutal and arbitrary executions, torture, and genocide committed then.

Sovann was a member of the Khmer Rouge during those horrible years. “Looking back,” he whispered, “I am ashamed of the terrible things I participated in as a member of the army. We treated people as if they were animals, and worse.”

When asked if he had ever taken a life, all he could do was quietly whisper ‘yes’ while staring at the bamboo floor, according to a report by Bible League International.

The reign of terror ended when Vietnam took control, but Sovann left the army a defeated man. He was continually weighted down by the crushing load of guilt he carried, and nothing provided any relief.

One day while he was preparing to spend another day in an alcohol-induced haze, there was a knock on his door. It was a pastor making calls on all the residents in his neighborhood.

“I don’t know why I let him in,” Sovann told Bible League International, “but I sensed that he could help me.” As they sat together, Sovann shared his personal despondency with the pastor, who immediately opened his Bible. He turned to Isaiah 1:18 and asked Sovann to read it.

“Come now, let us reason together,” says the LORD. “Though your sins are like scarlet, they shall be as white as snow; though they are red as crimson, they shall be like wool.”

“When I read those words…’scarlet…crimson…rouge,’ tears began streaming down my face,” he told Bible League International. “The pastor told me that even though I used to be Khmer Rouge, God would forgive all of my sins and make me white as snow.”

That was the beginning of a new life for Sovann. The power of forgiveness found in the Bible enabled him to embrace Christ as his personal Savior and Lord. “I thank God for this ministry and the pastors they train in Cambodia.”

“I don’t know where I would be if God hadn’t spoken to me that day,” he said, with a broad smile.

How you can respond:

Pray for Cambodia: Pray that any spiritual darkness in Cambodia would be lifted by prayer. Pray that the light of the gospel would so shine that the structures of society as well as individuals would be decisively changed. Pray for growth in the church without government manipulation or interference, and effective discipleship for young people. Pray for many Christian families to be raised up who can live for Christ as examples of His power to save and change. Pray for strong, mature, well-trained Christian leaders. (Operation World)