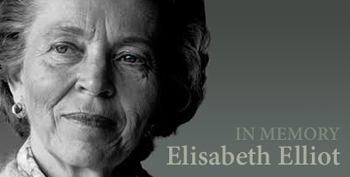 Elisabeth Elliot was an inspirational author and speaker whose books, courageous faith and words of wisdom influenced generations around the world. She was respected as a missionary who inspired many to serve God with reckless abandon. She graduated through the “Gates of Splendor” to her heavenly reward Monday morning (June 15) at the age of 88. In her later years she suffered with dementia.

Elisabeth was born to missionary parents in Brussels, Belgium, and the family soon relocated to the U.S. where she saw firsthand what a life serving others could mean. Her parents modeled their faith for her daily, resulting in her sensing a call to missionary service at an early age.

As a young woman, Elisabeth fondly remembered the mentor God provided for her when she was a student at Prairie Bible Institute. “Many were the afternoons when Mrs. Cunningham poured tea for me and I poured my soul out to her,” Elisabeth recalled. “Above all,” Elisabeth reflected, “she herself was the message.”

After graduating from Wheaton College, Elisabeth surrendered to missionary service in Ecuador. In 1953, she married Jim Elliot, a former Wheaton College classmate, and together they worked on translating the Bible into the language of the Quichua Indians. In January 1956, 10 months after the birth of their daughter Valerie, Jim and his comrades were speared by Auca Indians while attempting to make contact with them to share the Gospel.

Although Elisabeth was only 28 years old when her faith was put to the test, she was well-grounded. In her moment of darkness, she sought refuge in God and His Word. While the normal reaction could be to cower in fear and retreat to safety, Elisabeth persisted in her obedience to God’s call and eventually took her daughter Valerie to work among the Aucas — the tribe that speared her husband. She was a radical in her day.

Elisabeth understood that God uses every circumstance for His purpose, and felt, “Somehow God was in this.” God used the tragedy and her actions to paint a picture of forgiveness to the world and to mold her into one of His choicest servants. Her life became “Her Message” to millions.

“Through Gates of Splendor” was Elisabeth’s first and best-selling book. It shares the story of their attempt to reach the Aucas. As the book continues to be reprinted, updates about the families of Jim Elliot and the four other men who were slain and the miraculous work to the Auca tribe continue to be added.

Elisabeth believed, “If we want real life, our hearts must be set on glory.” She set her goals on living for eternity, and that carried her through many trials in life. The title of the book is derived from the fourth stanza of the hymn, “We Rest on Thee.” The wives of the martyred missionaries sang this hymn at their memorial service — a hymn also sung by their husbands before they entered the Auca territory.

missionary movement in the 1950s.

The movie “The End of the Spear” portrays the moving story of the plan God had from the beginning to reach the Aucas. Nine years after the tragedy, the Gospel of Mark was translated into the Auca language and many, including one of the killers, Mincaye, would give their lives to Christ.

Elisabeth’s other favorite titles include “Passion & Purity,” “Let Me Be a Woman,” “God’s Guidance” and “The Shaping of a Christian Family.” She poured her God-given wisdom into more than 30 books and the radio program “Gateway to Joy.” As Elisabeth always said, “Anything, if offered to God, can and will become your gateway to joy.”

When Elisabeth’s daughter Valerie turned 8, they returned to the U.S. After Valerie graduated from Wheaton College, she married Walter Shepard, a pastor whose family served as missionaries in the Congo. Their marriage has produced eight children.

Valerie cherishes her memories growing up in the jungle and describes her childhood as adventurous, happy and simple. She learned to forgive fearlessly and love tremendously.

In 2010 she wrote a children’s memoir about her jungle experiences which tells this same amazing story through her eyes called “Pilipinto’s Happiness: The Jungle Childhood of Valerie Elliot.”

In 1977, she married Lars Gren, a hospital chaplain, who helped her manage her ministry and served as her faithful companion and caretaker during her decline with dementia. Although she was unable to write books or speak in public, her words of wisdom continue to inspire many today.

Two years ago I was invited to have tea with Elisabeth and Lars. I marveled at the opportunity to meet this courageous woman who has humbly modeled the Beatitudes that Jesus taught to the world. Her home was filled with pictures displaying her life in the jungle, her husband Lars Gren and her daughter Valerie Shepard (and son-in-law Walt) and her eight grandchildren.

When accolades were given, she always pointed heavenward, giving praise to God and referring to herself as “A very small fish in a very big pond.” For a small fish, she has undoubtedly created a lot of ripples which caused others to look heavenward and desire to follow in her footsteps.

While at her home, I sensed the overflowing cup of her life — a life that modeled obedience, trust and setting her desires on eternity. Actions speak louder than words. Her life will continue to resonate as a sweet aroma for God long after her graduation to glory. — Baptist Press