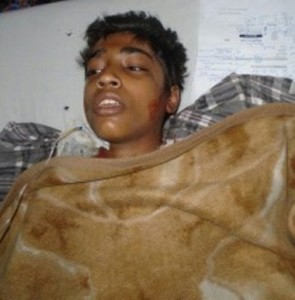 “Being Christian [means] being persecuted daily in this country,” Asif Masih said to International Christian Concern in a hospital in Lahore, Pakistan. “This is no longer a country for human being[s] or for liv[ing] a dignified life. There is no protection and no rule of law”.

On April 09, 2015, Noman Masih, 14, was burned alive by a group of unidentified Muslim youth in Lahore because of his religious identity as a Christian. The teenager was admitted to Mayo Hospital in Lahore shortly after the attack.

Asif Masih, Noman’s uncle, told ICC that Noman was an orphan and his mother remarried about two years ago, leaving him with his parental relatives. Due to a financial crisis, Noman’s family was unable to educate him; therefore, he was being trained in as a tailor at a local vocational training center.

While speaking with ICC from his hospital bed, Noman shared his story: “I have neither enemies, nor a dispute with anybody in the area I live. My tailor master asked me to go to the nearest market for some work and, on my way, [a] few men stopped me, asking my name and religion. I gave them my name and identified my religion as Christian. It was Friday prayer’s time and not many people [were] on the road.”

“Suddenly they started beating and abusing me. I tried to rescue myself, however, [I] couldn’t. One of them threw kerosene oil and [the] other set me on fire. With the help of the locals around I managed to stop the fire, however, [I became] unconscious,” he added.

Asif Masih was very upset over the prevailing persecutions against Christians in Pakistan. “I don’t see [a] bright and secure future of Christian[s] in this country,” he stated. The uncle condemned the incident and requested that media avoid publishing “generated and unauthentic”stories, which result in psychological stress for the Masih family.

A policeman in civilian dress was delegated for Noman’s safety in the hospital.

While speaking with ICC, Ataurehman Saman, a human rights defender and publications coordinator at the National Commission for Justice and Peace, commented, “This incident speaks volumes about the lofty claims and statements of the officials regarding [the] protection of minorities in Pakistan. The occurrence reflects the prevailing hatred for religious minorities that has been allowed to flourish in the society by design, through media, [hateful] sermons and textbooks.”

“One can witness more horrible incidents against Christians in [the] future if [the] government is not inclined to show its will to take affirmative, positive, productive and concrete steps to tailor the torn fabric of our society,” Saman added.

According to the medical reports, 60% of Noman’s upper body was burned during the attack. Unfortunately, due to the severity and extensive nature of his burns, Noman passed away a few days after he was admitted to the hospital.

Please join ICC in prayer for the family of a boy whose life was taken too early on account of his religious identity in a most horrible and painful way. Also, please pray for salvation for the perpetrators. –International Christian Concern www.persecution.org