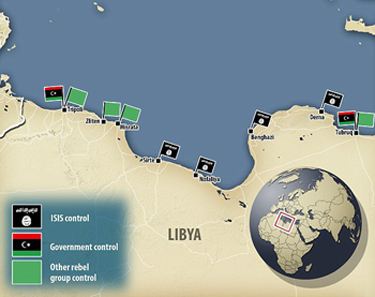 ISIS is using Libya ‎as access point into Europe and the U.S., taking advantage of the unstable, chaotic condition of the troubled country, according to a report by Fox News.

The Italian government intercepted over 30 ISIS fighters recently who entered through Libya, but many more may not have been captured.

“There is no way you can block it,” one government official told Fox News. “Libya is now an easy entry point into the E.U. and ultimately into the U.S. for ISIS. They are saying, ‘This is the way to America.’”

As the U.S. administration focuses their primary attention on Syria and Iraq, some worry that Libya is actually the most unstable country in the region and gives ISIS its best opportunity for entry to the West, according to the Fox story.

The Libyan port city of Sirte, which lies on the Mediterranean between Benghazi and Tripoli, was flying the black flag of ISIS last week and now is essentially under ISIS control. The terrorist group also controls the airfield — building a supply-line much like they did in Iraq when the city of Mosul was captured, according to officials.

Hard drugs have also become widespread in Libya, mostly introduced by outsiders who have entered the country easily. Libya now seems to be part of a drug route into Europe and the U.S., with a significant portion of the supply originally from Afghanistan.

Prior to Muammar Qaddafi’s overthrow, drugs were not widely used in Libya and even frowned upon, but that has changed considerably because criminal elements as well as ISIS needs money to fund their nefarious activities.

“Oil and drugs are how the militias are getting their money to fund their terrorism and America should be very concerned,” one intelligence agent told Fox.

Libya has deteriorated since Muammar Qaddafi was killed in 2011. Two of his sons are being held in the country and may face the death penalty. Much of the country is lawless, there are no border controls in place, airspace is not monitored and the country has become a crime hub in the region, sources told Fox.

“It has become a huge problem,” said an international intelligence agent working in the country. “There is no more trust for the Americans anymore.”

Some argue that if the U.S. inserts troops into the region, it shouldn’t be in Iraq or Syria, but in Libya.

“Everyone is now going to Libya … terrorists are coming from all over because they can move freely and the U.S. really has nobody on the ground there. The Americans and West needs to open their eyes,” one source who just returned from Libya told Fox. “Libya is a mess and much worse than Iraq. ISIS has [a] very good command-and-control building in Libya.”

One international intelligence officer deeply concerned about ISIS movements was disconcerted that there are no operations planned or taking place near Libya. “When and where will this stop? When will western powers open their minds and see that this is happening on the ground?” he said. “The West is underestimating ISIS and its military tactics. These guys are much more trained and much more dangerous than Al Qaeda ever was, and nobody is paying attention to Libya.”