“My past is so dead,” Laura says. “I really learned that my identity in the past was dead in baptism. I’m simply no longer the same person. My identity is the cross. I am so solid in my purity now that I refuse to be kissed until my wedding day. My old identity is a sunken ship, and I won’t raise it again.”

But still the subtle snake always beckons. When aforementioned man dangled high pay before her eyes, she took a break from the convention and went to the bathroom, not only to cry, but also to declare once again her born-again identity. Upon returning, her trusted friend prayed directly into her ear for five minutes.

“Finally, I could breathe without tears,” she writes on her blog. “I struggled with feelings of unworthiness again. It was crazy because I am righteous in Christ. The lie wants to be a stronghold in me.”

Laura’s descent into the sex industry is a familiar story of pathos for young women who may have few professional options and get tempted by easy money.

When Laura went through a divorce in the mid-1990s, she learned from a neighbor about topless dancing as a way to feed and care for her two kids.

But with the dancing came alcohol and drugs, which began a vicious cycle. “I found out you could make even more money selling your body,” she says. 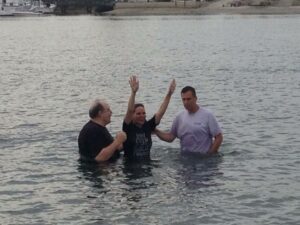 Fortunately, her club lost its liquor license. Without alcohol to keep her going in the degrading lifestyle, she quit and found a job in fiber optics with her sister.

In 2004, Laura began to attend church. “Mainly I wanted God for my kids,” she recalls. “I thought it was too late for me. I knew I was a mess, and I didn’t want them to turn out like me.” She now has four children. Her youngest is 11.

But it wasn’t until 2009 that she finally started digging into her Bible. “I got a version that I could understand, and then I could not put it down,” she says. “It was really good. I really started falling in love with God, and I started hating the way I was living.”

Laura finally surrendered her life to God and was born anew by the Spirit from above.

She transferred to the Rock Church in San Diego, under whose auspices JC’s Girls ministered. “I could feel that God was healing me,” she says.

In March 2014, she became a leader in the group. JC’s Girls – short for Jesus Christ’s girls – started in 2005 and now has chapters in Las Vegas and Riverside. 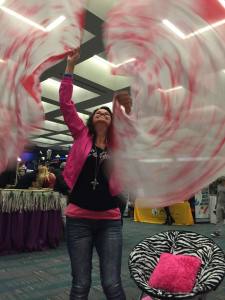 Even though their mission is antithetical to the sex industry, the L.A. adult convention allows JC’s Girls to set up a booth for the three day affair simply because they want the $2000 entrance fee, Laura says.

Decorated with fuchsia and black and with zebra carpets and sofa chairs, the JC’s Girls booth fit right in, though their attire is more modest than most women at the convention. They shared their testimonies with any interested party, and from time to time, Laura would drum up attention by waving her worship flags.

The flags, which she manufactures and sells herself, have a special meaning to her because they helped her to worship God more fully, she says.

“When worship music would start, my hips would move, my insides would jump, and I would just want to move my feet, BUT, because of my past, I would stand in one place and feel trapped. I felt that if I moved my body, I was trying to draw attention, trying to make some money, trying to be seen, ” she explains on her blog.

But in a Women’s Aglow meeting, a friend handed her a worship flag, and it worked like a catalyst to overcome her past and adore God fully.

“I was lost in worship, dancing for my Father, listening to Him telling me how beautiful my dancing was and how it was holy, set apart for Him now. My motives were pure. My heart was pure. And God delivered me from a strong hold that had kept me from freely worshiping Him with dancing.”

In its other outreach, JC’s Girls hits the streets and goes into six nightclubs in San Diego.

“They let us in because they don’t feel threatened by us,” she says. “We just go in and love them and give them a gift.”

The clubs, she says, don’t run the risk of closing with an exodus of dancers because the pay is so high.

“It’s really hard for dancers to walk away from their job because the money keeps them pretty hooked,” she says. “To go to a menial job represents a serious pay cut. They have to step out in faith.”

But her ministry doesn’t have a transition house.

“I’ve gotten a lot of calls lately from girls asking about housing,” she says. “Maybe that’s what God wants for us here in San Diego.”

Laura says 100% of the donations goes to helping girls. She supports herself with an accounting job and the sale of her worship flag.

“Our message is to let women know that God loves them right where they’re at – 110%,” she says. “Our hope is that they will encounter the Father’s love and enter into a relationship with Jesus and come into wholeness through His heart.”

Do you want to know God personally? Here are four steps…