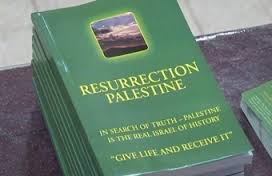 New interest in the Hebrew and Christian Bible may point the way to reconciliation between war weary Jews and Palestinians. The Jesus Christ Embassy Palestine, a Christian organization, thinks so and has launched a campaign to call 1,000,000 people to pray for the peace of Jerusalem. The Christian ministry recently held a series of meetings in Palestine and introduced DNA scientific studies along with the Bible record to demonstrate that many Palestinians are direct descendants of the sons of Joseph, and that the name Israel was originally applied to them, and not directly to Judah, the father of Jews.
Embassy Palestine Chairman Terry McIntosh met with Palestinian political leaders in the West Bank by invitation to share his findings. A second press conference was held in Jericho and the Embassy report caught the attention of Palestinian media. Copies of the report and free Bibles were distributed to attendees. “The Bible is the only document that proves an ancient Palestinian connection to land and the House of the original Israel,” according to McIntosh.
McIntosh says that Jewish Israel needs Palestine, and Palestine needs Israel. He believes that corporate prayer can lead to a historical reconciliation, and that many more Bibles are being opened to investigate the claim. “There is huge interest in the study from within educated Palestinian circles. According to the Bible, God’s plan is to take the stick in Judah’s hand (the father of Jews), and the stick in Joseph’s hand (the father of Palestinians), and make one new man out of them. Reconciliation is the heart of God. We have reached out to Jewish Israel, too, but no response from them yet. “
DNA studies confirming a blood brother relationship between the warring brothers are not new, and there have been past efforts made toward reconciliation. McIntosh says that response has been poor because God’s Word and the Bible was not a part of a secular solution. “If we leave God out of it, it will eventually fail. When we acknowledge God’s plan we can build on truth and go from there.”
The Embassy study traces the Biblical trail from Genesis 48 when the man Israel placed his name upon the children of Joseph and on through subsequent division of the House of Israel, and captivity into Assyria where the descendants of Joseph lost their national identity. The report further demonstrates that a remnant of the people remained in the land, and DNA tests confirm the Bible story. “For lovers of truth, whether religious or not, truth has supreme authority in the issue . Without it, all is in vain,” McIntosh says.
The advent of DNA studies conducted by the Hebrew University and other leading research organizations all agree regarding the genetic relationship between Jews and the majority of Palestinians. “It destroys the false notion that all Palestinians are descended from Ishmael as previously thought, and creates vision for a new reality on the ground. It is God’s vision that we must get on board with, and be willing to acknowledge the promises of God to the whole House of Israel, not just Jews and those with them today.”
The call to prayer for the peace of Jerusalem includes Jews, Arabs, and Palestinians. The Embassy initiative calls upon Arabic terror groups to cease all hostilities toward Jewish Israel, and for Israel to restore Palestinian rights to life and dignity. “It’s impossible to change the past, but truth is the path to freedom. There is a point where both sides must recognize the others’ independent sovereignty, and extend forgiveness for past wrongs,” McIntosh said.
He quoted the words of Jesus Christ to the Palestinian attendees saying that one should pray for their enemies and bless them instead of trying to annihilate them. “It’s been said that one makes peace with the enemy, not with our friends. The principal applies to both sides.”
Please pray for eyes and minds to be opened to these truths and for reconciliation and salvations to come forth.–Christian Newswire