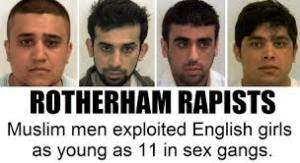 The Muslim rape gang scandal in Britain just keeps getting worse. Last August, the BBC reported that “at least 1,400 children were subjected to appalling sexual exploitation in Rotherham between 1997 and 2013, a report has found. Children as young as 11 were raped by multiple perpetrators, abducted, trafficked to other cities in England, beaten and intimidated it said.” Five months later, not only has little been done to combat this scourge, but it has grown exponentially worse: hundreds of new cases have been discovered, and one of the victims says that those who abused her are “untouchable.”

Sky News reported that in addition to the 1,400 cases revealed last year, “hundreds more cases were known to authorities prior to its publication and that hundreds more are being reported.” The victim who spoke to Sky News said that now all these months after the news first broke of the extent of this savage exploitation, “It’s still going on if not worse, because now they’re having to hide it more. I’m still seeing my abusers driving young girls in their car. They’re untouchable.” She said of the police that “all they care about is getting a statement. Six months on we’ve had no arrests, we’ve had no charges, evidence is still being lost.”

These words were reported a month after a team of government commissioners took over the Rotherham Council, after finding it in “complete denial” about the scandal. One report says that 96.3% of the rapes in the UK are caused by Muslims.

Why is this happening? What illness has overtaken British authorities, such that they are covering up these cases and doing little or nothing to apprehend offenders? The answer lies in the fact that these are not simply criminal cases involving outlaw gangs. The rape gangs are made up of Muslims who believe that the Qur’an (4:3; 4:24; 23:1-6; 33:50) and Islamic law allow them to capture non-Muslim girls and press them into sexual slavery, as we have also seen the jihadists of Boko Haram and the Islamic State also do in the past year. And British authorities have feared to confront the problem in its full magnitude because they’re afraid of the stigma of stigmas in the twenty-first century West: being called “racist.”

In Rotherham, British officials “described their nervousness about identifying the ethnic origins of perpetrators for fear of being thought as racist; others remembered clear direction from their managers not to do so.” The very idea that “racism” was a factor here reflects the myopia of the British government and media elites, who consistently frame issues regarding jihad terror and Islamic supremacism as racial. In fact, however, the rape gangs operated not because they were made up of men of Pakistani origin, but because they were made up of Muslims who believed that infidel girls were nothing more than, in the immortal words of the Grand Mufti of Australia a few years ago, “uncovered meat.”

In any case, the fear of being stigmatized with the “racist” charge is unmistakably what hindered the proper prosecution of the rape gangs, and hinders it still. The perpetrators are untouchable because the British authorities have yet to tackle, and may never tackle, what really makes them untouchable: the prevailing culture — not just in Britain, but in the U.S. also, and all over the West — that consigns all concerns about the activity of Muslims, whether it be jihad terror or Sharia- and Qur’an-inspired sex trafficking, as here, to “racism” and “Islamophobia.” The officials who swept these cases under the rug were terrified of being called “bigots” by the likes of Nick Lowles of the Leftist organization Hope Not Hate, which acts determinedly to smear and marginalize anyone who dares raise a voice against large-scale Muslim criminality and the Islamization of Britain; and Fiyaz Mughal of TellMamaUK, an organization dedicated to combating “Islamophobia” in Britain — by which it means even the smallest, weakest opposition to jihad terror and Islamic supremacism.

People like Lowles and Mughal have real power in David Cameron’s shattered, staggering, terrified, dhimmi Britain. The members of the Rotherham Council may quite reasonably have thought that if they revealed the full magnitude of Muslim rape gang activity, and prosecuted the offenders energetically, they would be accused of exaggerating the problem, or even of fabricating it altogether, out of a deep-seated “racism” and “Islamophobia.” They could consequently have lost their jobs and never gotten another one. So they kept quiet. And the victim tally grew ever higher.

As Britain races to ruin, these officials can console themselves that even as thousands of girls’ lives were ruined on their watch, and the world was treated to the spectacle of a free nation submitting meekly to barbaric activity on a shocking scale, at least they were never, ever “racist.”

Please pray for the victims of these terrorists – for their freedom and healing. Please pray for justice in UK for the perpetrators and an awakening to the hidden sins of false racism. Also please pray for salvation of these Muslims. — Assyrian International News Agency

A Walk of Faith Begins with a Step of Faith