By Mark Ellis and Michael Ashcraft 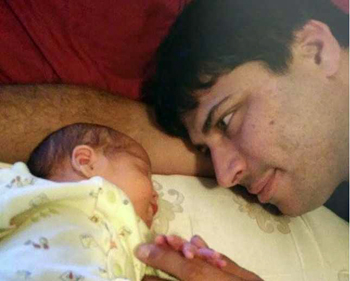 She was accosted in January while staying at a small hotel in a college town. There on business, Jennifer never realized she was being followed until she turned around to close the door to her hotel room.

“It was so snowy and windy that I wouldn’t have heard his footsteps even if he had been stomping,” writes Jennifer Christie in a first-person account of her ordeal in Lifesite News. “It happened so fast. I got the door open, turned around to close it, and he was there – a huge man.”

Her first reaction was confusion. She never had time to process the danger and feel fear. The monster punched her in the face. Apparently he dragged her into her room and raped her. Mercifully, she doesn’t remember that part.

Later she was found in the stairwell. “I don’t know why I was there – maybe I was trying to go for help,” she notes.

In the post-rape treatment, she tested negative for HIV, gonorrhea, chlamydia, syphillis, herpes and other STDs. But they didn’t check for pregnancy.

A month later she was scheduled to work on a cruise ship. Two days into the trip she came down with dysentery. After antibiotics did nothing to cure it, she checked in at the local hospital while docked at Cartagena, Colombia. An ultrasound revealed she was expecting a baby.

Back on the ship, doctors and health care workers tried to reassure her. It would be easy enough to fix and resume her normal life, they said – if she aborted her baby.

“I spent the next week listening to a team of very well-meaning doctors and nurses console me with how “easy” it would be to “take care of it” — to kill the child.”

But Jennifer is a Christian who holds a firm conviction that the baby forming in her womb is a human life. One doctor in particular, though well-meaning, was “more vehement” than the others in pushing abortion, she recalls.

At first, Jennifer had to process some measure of shock. Medical staff even quarantined her in fears that she might break down in public, she recounts.

Jennifer held her breath as she made a transatlantic telephone call to tell her husband the news. She never could have expected his remarkable, grace-filled response.

“Okay. Okay… all right… this is all right,” he said, when he heard.

“What do you MEAN this is all right?” she asked.

“I mean we can do this. We’ll get through this. It’ll be okay,” he told her. “I love babies. We’re going to have another baby. Sweetheart, this is gift. This is something wonderful from something terrible.”

How many men would have welcomed a stranger’s baby – especially as the result of a forcible rape?

With his amazing affirmation, Jennifer “began to feel the stirrings of joy for the new life in my womb blossoming under my heart,” she writes.

“That new love grew so fierce it overwhelmed any trepidation or angst,” she says. “My husband was right. We could do this.”

Buoyed with confidence and backed by a supporting husband, she grew in conviction about the path ahead.

After the cruise she returned to North Carolina and was surrounded by medical personnel who encouraged her desire to have the child.

Jennifer did not have an easy pregnancy. She suffered, preeclampsia, high blood pressure, and uncontrolled seizures.

“It was terrifying at 26 weeks when they admitted me saying they might have to deliver that night,” she recalls. It was “terrifying because I desperately wanted my son to live.”

After surviving that scare, Jennifer was constrained to strict bed rest at home.

“Every week we made it further was awesome, knowing how glad I’d be once he got here safely in my arms,” she said. “Emotionally I was doing very well.”

Then in October, their little bundle of joy was born.

“He is a delicious gift that filled the hole in our family that we never realized was there,” she says.

Jennifer found support from other mothers who had given birth to babies conceived by rape.

“We are survivors, not victims,” she notes. “Every time we, as rape survivor mothers, share our stories, we are strengthened as we strengthen others. Who knows what lives might be spared?”

“The pressure to abort from the medical community was extremely eye-opening to me,” she writes. “So many times I was told how ‘simple’ it would be and how quickly I could just ‘get on with my life’ once the abortion was over.”

Now a mother of five, Jennifer blogs for www.savethe1.com and promotes the sanctity of life.

“One day my son will have a voice,” Jennifer says. “Until he can use it, it’s my responsibility – my privilege – to speak for him. That’s my story.”

“Our little boy may have been conceived in violence, but he is a gift from God. He made us complete.”

Jennifer Christie is using her middle name in lieu of her surname in order to protect the identity of her family. Her first-person account appears here