After Islamist militias in Libya took control of Tripoli International Airport on August 24th, nearly a dozen commercial jetliners went missing, and western intelligence agencies recently released a warning that the jets could be used in terrorist attacks, possibly on the anniversary of 9/11 or thereafter.

“There are a number of commercial airliners in Libya that are missing,” one government official told the Washington Free Beacon. “We found out on September 11 what can happen with hijacked planes.”

Al Jazeera television reported in late August that western intelligence reports had warned of terror threats to the region from 11 stolen commercial jets.

In reaction to the reports, Tunisia stopped flights from other Libyan airports at Tripoli, Sirte, and Misrata over concerns that jets from those airports could be on suicide missions, according to the Free Beacon.

Intelligence reports of the stolen jetliners were distributed within the U.S. government over the past few weeks and included a warning that one or more of the aircraft could be used in an attack.

Tripoli International Airport and a number of the aircraft parked there were damaged during the fighting that started in July. The airport has been closed since mid-July.

The fleets of Libyan Airlines and Afriqiyah Airways were located at the airport when the fighting began and include 14 Airbus 320s, three Airbus 330s, two French ATR-42 turboprop aircraft, four Bombardier CJR-900s, three Airbus 319s, and one Airbus 340.

Tripoli International Airport is 619 miles from Rome, less than a two-hour flight. 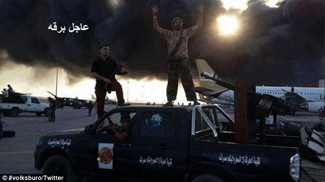 There are conflicting reports on which group may control the missing planes. One report says they are under the control of a group known as Libyan Dawn, an umbrella group for Islamist militias.

Mekkaoui said reliable intelligence reports given to states in the region indicated the Masked Men Brigade is planning to use the planes to attack a state in North Africa on the 9/11 anniversary, according to the Free Beacon.

Ansar al Sharia, based in Benghazi, reported on social media that it has newly acquired weaponry, including SA-6 surface-to-air missiles, anti-aircraft guns, rocket-propelled grenades, shoulder-fired anti-aircraft missiles, assault rifles, and armored vehicles. The group is closely aligned with al Qaeda-linked rebels in Syria, according to the Free Beacon.

Islamists control most of Benghazi, as well as Libya’s capital of Tripoli. Currently, members of Libya’s parliament have fled to the small eastern city of Tobruk and are living and working on a Greek car ferry docked in the port.

A senior State Department counterterrorism official declined to comment on reports of the stolen jetliners, according to The Washington Free Beacon.

Egypt, which borders Libya, has already been forced to intervene in Libya due to its fears the country will become a terrorist-run state. Egyptian military jets reportedly conducted air strikes inside Libya against Libyan Dawn positions, and U.S. officials said there are signs a larger Egyptian military operation may be planned.

Libya is an oil-rich prize for whomever gains ultimate control. If the country is taken over by Islamist extremists, American officials believe it may become another terrorist haven in the region.

Counterterrorism expert Sebastian Gorka said the stolen aircraft could be used in at least two ways.

“The first would be how commercial airliners were used on Sept. 11, 2001, literally turning an innocent mode of mass transit into a super-high precision guided missile of immense potency,” Gorka told Fox News.

“The second tactic could be to use the airframe with its civilian markings as a tool of deception to insert a full payload of armed terrorists into a locale that otherwise is always open to commercial carriers,” he said.

Michael Rubin, a counterterrorism specialist with the American Enterprise Institute, said commercial jetliners in the hands of terrorists could be formidable weapons.

“Who needs ballistic missiles when you have passenger planes? Even empty, but loaded up with fuel they can be as devastating,” Rubin told the Free Beacon.

“Each plane could, if deployed by terrorists to maximum devastating effect, represent 1,000 civilian casualties.”

Among the potential targets are urban areas and economic targets, like Saudi Arabia’s oil fields. “One Saudi security officer once told me that they would only have about 90 seconds to shoot down a hijacked plane from the time it left international airspace to impact in one of the region’s most important refineries,” Rubin said.