Michael Franzese was formerly a high-ranking member of one of New York’s most violent and ruthless crime families. His life was filled with power, luxury, and deadly violence. Michael masterminded brilliant scams on the edge of the legitimate business world, from auto dealerships and union kickbacks to financial services.

At one time, Franzese was generating $5-8 million per week through legal and illegal channels in order to fund the criminal activities of the mob. In fact, he was so notorious that 14 different law enforcement agencies banded together in an attempt to bring him down.

Just a few years ago, Vanity Fair named him one of the biggest money earners the mob had seen since Al Capone. By the age of 35, Fortune Magazine listed him as number 18 on its list of the “Fifty Most Wealthy and Powerful Mafia Bosses,” just five behind John Gotti, the then Boss of the Gambino crime family in New York City.

“My dad, John ‘Sonny’ Franzese, was the under boss of the Colombo crime family, one of the five La Cosa Nostra families in New York,” Michael says. “So I kind of grew up in the life style. My dad was a very high profile public figure at the time and was always under major investigation from the government. So I grew up in that kind of atmosphere.”

“Originally my dad didn’t want me to be in that life. I was a pre-med student headed on my way to be a doctor when he got in some very serious trouble, was indicted several times, and eventually drew a long prison sentence. 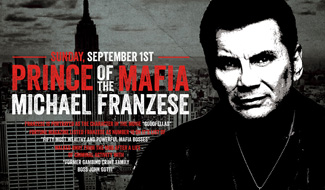 “At that point in time, Joe Colombo, who was the boss of our ‘family’, took me under his wing and, after a while, I dropped out of school and wanted to be on the street to help get my father get out of prison. He proposed me into that lifestyle and in 1975 I took an oath Halloween night actually and became a ‘made member’ of the Colombo crime family.”

“I was very fortunate and I knew how to use that life to benefit me in business and was very active in that lifestyle and very aggressive on the street. I ended up creating a scam to defraud the government out of tax on every gallon of gasoline. It was up and down the east coast and also we started to branch out into other areas, but it was mainly New York, New England states right down to Florida.

“At one point it was close to $0.40 a gallon and I was selling half a billion gallons of gas a month. You do the math — it was a lot of money,” Michael recounts.

“I never enjoyed that, but it’s a tense life and you have to worry about guys on the street, because I became a major target of law enforcement. I drew five indictments, so you’re worried about the government, and you’re worried about guys on the street, so it’s kind of tense, but you know you get through it at some point. That was my life at that time.”

“I was indicted several times and I actually went to trial four times and was acquitted each time. I was even acquitted in a case that Rudy Giuliani brought against me in 1984. It was a big racketeering case and I beat him. But I eventually took a plea to racketeering mostly involving the gasoline business and I drew a 10- year prison sentence. I also had $15 million restitution to pay off and I went off to do my time.”

“Prison is never fun and they had me in solitary for three years. But I had been visiting my father since I was five years old, so I wasn’t afraid of prison, but I don’t think anybody enjoys it.”

Before going to prison in December of 1985, Michael met the love of his life, Camille Garcia, who was the oldest of seven children and had it pretty tough growing up.

Franzese married her in July 1985 and went to prison in December of that year and they have been married now for 29 years.

“It was her love of God and her foundation in faith that is what has kept us married I believe, and we’re very much in love,” he said.

A prison guard pushed a Bible through a slot in his cell door the first night he came in on a parole violation in 1991.

“It was the only night in my life I experienced hopelessness,” he recalled. As he began to examine the character and the claims of Christ, he was born again.

“That Bible, and reading about Jesus, really brought me through some very tough times until today.”

Since then, he has become a committed Christian, accepted God as his Heavenly Father, and he has publicly renounced organized crime, created a foundation for helping youth, and has become a motivational speaker and is telling people his story as a bridge to God’s story.

His message? No one is so bad that they are beyond Gods reach. Now his life is committed to sharing the Gospel with as many people who will listen to him.

“Yes, that that’s what I live for,” he said. “I’m in the ministry now and I am sharing the Gospel at any opportunity I can get.

“Any criminal activity is only a dead end street. I tell anybody that’s having any kind of struggle in their life, I don’t know how to get through struggles without Jesus Christ. He’s been my hero, my savior and everything that I’ve had are only blessings that I attribute to my relationship with Jesus.”