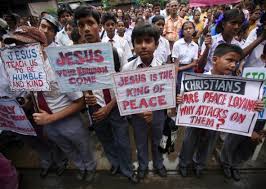 Several villages in central India have outlawed the open practice of Christianity – a move of questionable legality yet one that worries church leaders who say it already has encouraged anti-Christian violence.

“The situation is becoming worse. The anti-Christian propaganda is becoming stronger,” Arun Pannalal, president of Chhattisgarh Christian Forum, told World Watch Monitor on July 15. Chhattisgarh is one of India’s 29 states, in the heart of the country.

Pannalal said the village of Belar, in Chhattisgarh’s southeast district of Bastar, convened a Gram Sabha, or village assembly, on July 6 and passed a resolution banning all non-Hindu religious activities.

The Belar assembly, Pannalal said, was an echo to Gram Sabha of representatives from about a dozen villages held May 10 in Sirsiguda village, also in Bastar district. There, the delegates passed a resolution banning the outward practice of non-Hindu faiths.

“To stop the forced conversion by some outsider religious campaigners and to prevent them from using derogatory language against Hindu deities and customs, the Sirsiguda Gram Sabha bans religious activities such as prayers, meetings and propaganda of all non-Hindu religions,” said the text of the resolution. It contains no provisions for penalties.

“These meetings are held under the Chhattisgarh Panchayati Raj Act,” or Village Council System Act, Pannalal said. He said the councils erroneously believe the act provides a legitimate legal foundation upon which to ban minority religious practice.

“Hindu fundamentalists are using this provision to take the people for a ride to enforce their agenda,” he said. “Their strategy is to use the influential gram sabhas to adopt such controversial resolutions to mislead the locals to believe that banning non-Hindus is well within the law.”

The Times of India, a national English-language daily newspaper, on July 9 quoted a claim by Suresh Yadav, the Bastar district president of the Vishwa Hindu Parishad, or World Hindu Council, that more than 50 villages have adopted similar resolutions.

Rev. Aneesh Andrews, Methodist district superintendent for the region, told World Watch Monitor that after the resolutions are passed, poor Christian families in some villages have been denied government rations of staples such as wheat, rice and sugar, and access to village water sources such as tube wells and common ponds.

“In some places the passing of the resolution has been followed by attacks on pastors and pulling down of village churches,” Andrews said.

“It is not just passing of a resolution,” he said. “This is a ploy to harass Christians.”

Following the adoption of the multi-village resolution at the Sirsiguda village, 10 Christians – including three pastors – were assaulted by Hindu fundamentalists, according to a report by the Salt Foundation, an Indian religious-freedom organization.

Christians in the villages “were not given access to (rations) due to their religious practices and for not giving donations to the village’s Hindu temple, as reported by our area coordinator,” the foundation report said. “Without the ration cards, they were not able to receive any food from the government ration shop and if they went and bought food from (shops in) the city it would be exorbitantly expensive. This made them raise a concern.”

In two villages, Gadiya and Parapur, Christians have been ordered to leave town “or suffer the consequences,” according to Rev. Vijayesh Lal, national director of the Religious Liberty Commission for the Evangelical Fellowship of India. The threats, Lal said, have been made by groups containing members of the Vishwa Hindu Parishad, a Hindu nationalist organization.

“If timely protection and intervention is not provided, there is an apprehension of anti-minority violence,” Lal said in a July 15 letter to Chhattisgarh Chief Secretary Vivek Dhand. Lal also conveyed reports of a Christian man in Kue Mari village who had been ordered to pay a fine. He did, and yet his house was burned down, Lal said.

“Today he is living under a plastic sheet with his family that includes three children and his elderly parents. I humbly request you to please intervene in his situation and provide him some relief and protection,” Lal wrote to Dhand.

The resolutions popping up in Chhattisgarh are the first of their kind, according to Rolf Zeegers, an analyst for Open Doors International, a charity that provides aid to Christians who live under pressure because of their faith.

“Christian leaders fear that the ban will increase suspicion and distrust in the community, generating disharmony and hate that could have disastrous consequences for non-Hindus,” Christians and Muslims alike, Zeegers wrote in a recent Open Doors report.

“Following the ban and the attack on a church being the latest in a string of violent incidents, Christian leaders affirmed that Chhattisgarh is becoming a cauldron of hate mongering against non-Hindus,” he said.

Chhattisgarh law already requires residents to obtain government permission before they can change religions, placing the state among the handful in India with laws restricting conversion. The anti-conversion laws, held up as a tool to defend individuals from being forced to convert against their will, are regarded by religious-freedom advocates as a tool that instead is used to drive minorities into the corners of society. And Chhattisgarh, governed by the Hindu nationalist Bharatiya Janata Party, is particularly fertile political ground for anti-minority abuse, church leaders fear.

“The situation could get worse. We have to be vigilant,” said Purna Sagar Nag, bishop of the Chhattisgarh diocese of the Church of North India. “Right now, it is confined to [Bastar] district; it may spread to other areas.”

“We are planning to take it up with the higher government officials to ensure that this stopped at the earliest,” he said.

Legality aside, the chief concern among church leaders is the potential the resolutions have to encourage a climate of impunity toward religious minorities.

Catholic Archbishop Anil Couto of Delhi has urged authorities to intervene and stop the ban on non-Hindu missionaries in Bastar district. In a statement released to the press, Couto said a ban “violates constitutional rights of freedom of faith, and the freedom of movement, expression” and will have “serious impact on the secular ethos of India, and damages its international reputation.”

“Though it could be considered as just another ban on Christian missionaries at the behest of fundamentalist groups and bigoted political functionaries, who are now greatly encouraged, it is a grave assault on the fundamental rights of individuals and peoples’ groups,” he said.

Allowing the bans to stand, the archbishop said, would encourage extremist religious organizations to wage hate campaigns against Christians, which in turn give rise to organized violence.

Please pray for Christians and Christian leaders and organizations within India to be able to worship freely, as well as for favor with government officials to enact laws for religious freedoms and protections.–World Watch Monitor