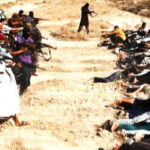 The militant group that has been ruthlessly fighting to take control of Iraq has apparently posted chilling photos on jihadi internet forums seeming to show the executions of Iraqi security forces.

According to a story from CNN by Mohammed Tawfeeq, Yousif Basil and Ashley Fantz, the news organization cannot independently confirm the authenticity of the images purportedly posted by ISIS, or the Islamic State in Iraq and Syria.

CNN said it is examining the terrain in the images, some of the signage on buildings in several of the pictures and the uniforms of the apparent victims. Those details suggest the photos are real and were taken in Iraq.

A caption on some of the images reads, “Apostates heading to their hole of doom.”

ISIS, an al Qaeda splinter group, wants to establish a caliphate, or Islamic state, in the region that would stretch from Iraq into northern Syria. The group has had substantial success in Syria battling Syrian President Bashar al-Assad’s security forces.

CNN said that ISIS’s quick advance in Iraq has been helped by many Sunnis who feel that the Shiite-dominated government has marginalized them.

On Friday, a tweet on what was claimed to be an ISIS Twitter account claimed that its members killed at least 1,700 Shiites. CNN was unable to verify the authenticity of the account, and the account appeared to have been taken down Sunday.

The militant group continued its assault Sunday. Iraqi security forces and gunmen believed to be ISIS clashed near al-Khalis, which is about 18 miles from Baquba, police officials in that Iraqi city told CNN.

Baquba is about 37 miles northeast of Baghdad, the capital. ISIS seized Iraq’s second-largest city, Mosul, last week and have threatened to march on Baghdad.

“Mosul didn’t fall,” CNN reported Iraqi Prime Minister Nuri al-Maliki told military leaders in Baghdad in a speech televised Sunday on state TV. “The ones who have fallen are the politicians who have bet against Iraq.” The Prime Minister said, “We will not allow anyone to divide the Iraqi people.”

Al-Maliki called on his top military leaders to march and fight against ISIS, while criticizing Iraqi politicians conspiring against their homeland and Iraqi soldiers who have refused to continue to fight when confronted by ISIS.

“We will march on every inch, with all our weapons, with all our will and faith so we can liberate and cleanse every inch of Iraq — from the southernmost point to the furthest point in the north,” CNN said he exhorted the military leaders.

Also on Sunday, ISIS gained control of two villages in Adhaim, a move that constituted the militants’ first push into Diyala province, which is northeast of Baghdad. Baquba, Diyala’s capital, is an ethnically-mixed city, though Sunnis represent a slight majority.

Given Baquba’s proximity to Baghdad, if Baquba were to fall, it could possibly give ISIS militants three-pronged access to Baghdad — from Anbar province to the west, Ninevah and Salahuddin provinces to the north and from Diyala province from the northeast.

In other violence Sunday, CNN said, three mortar rounds landed in al-Khalis, near a recruitment center opened recently for volunteers to join the Iraqi army in their fight against ISIS. Officials could not provide more details.

The northwest Iraqi city of Tal Afar fell to ISIS militants as well, according to Iraqi Gen. Mohammed al-Quraishi. Many Tal Afar residents — ethnic minority Shiite Turkmen — fled the fighting by heading north toward Iraq’s Kurdish region. Tal Afar is in northwest Iraq in Nineveh province, midway between the country’s border with Syria and the Iraqi city of Mosul north of Baghdad.

Violence perpetrated by ISIS shook a small town near Mosul again Sunday, security officials in Baghdad and the town of Tal Afar told CNN. Several mortar rounds landed on a busy area in the town west of Mosul, killing at least seven and wounding 33 people.

Between 50 and 100 U.S. Marines and U.S. Army personnel have arrived at the U.S. Embassy in Baghdad, a U.S. official told CNN on Sunday.

A U.S official acknowledged to CNN that the additional embassy security personnel being added are U.S. Marines who specialize in embassy protection during high-threat conditions.

The U.S. invaded Iraq in 2003. American military forces ended their withdrawal from the country in December 2011. Please pray for the security of the people of Iran, the safety of U.S. personnel, the salvation of Muslims in that country and the protection and peace of Christians there as well. –ASSIST News