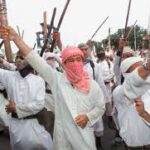 International Christian Concern (ICC) has learned that a Christian mother of two and her cousin were beheaded by al-Shabaab Islamic extremists once their Christian faith was discovered. The extremists beheaded them publicly in front of her daughters and many of the villagers in the town square.

Morning Star News reported that Sadia Ali Omar, the mother of the two girls, and her cousin, Osman Mohamoud Moge were beheaded in the port town of Barawa in the Lower Shebelle Region on March 4. Before the two were martyred in front of many witnesses, sources report that the Islamic extremists said, “We know these two people are Christians who recently came back from Kenya – we want to wipe out any underground Christian living inside of mujahidin [jihadists’] area.”
Al-Shabaab is a rebel militia group who has vowed to rid Somalia of all Christians converting from Islam. Converting to Christianity in Somalia is punishable by death. The militants who “slaughtered” the two believers “became suspicious of Omar and Moge due to their irregular attendance at Friday mosque prayers,” sources said.
Corey Bailey, Regional Manager for ICC says, “It is an injustice that a mother can be murdered in front of her children merely for being a devout follower of her chosen faith. Al-Shabaab is an Islamic extremist group that has vowed to make Somalia ‘purely Islamic.’ The group adheres to an extremely harsh interpretation of Sharia that includes the beheading of converts from Islam and the removal of hands from thieves. The practice of torturing and killing converts from Islam must be addressed by the international community and should have no place in modern society.”
Please pray for the Christians in Somalia as well as Muslims there who need to know the love of Jesus Christ. — International Christian Concern