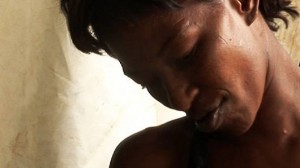 Betrayed as a child, teenager and adult, Lisha* was desperate to escape her life of forced prostitution. She was raped, abused, addicted and trapped in a life of slavery. Photo by Martha Richards/IMB

She was just a child, and she trusted him. He was her pastor. Yet he raped her, and no one believed her story.
Years passed, and Lisha* was once again betrayed, this time by a friend who also raped her — again and again.

Then, as a pregnant youth, Lisha was rejected by her cynical, unforgiving mother. Kicked out of her home and abandoned by her family, Lisha had only an abusive “boyfriend” to turn to.
Tired of raping her alone, he gave her to his friends for the same purpose. Nothing is free, and because he gave her a place to stay, he said that she owed him. Forcing her into prostitution was the next step, one that enslaved her and provided an income for him.

Gone were her youthful dreams of becoming a social worker. Ahead was a life of danger, illicit sex, physical and emotional abuse, forced slavery and an addiction to drugs.

Lisha was trapped, transferred from one pimp to another, taken to another city, and sexually exploited. Lisha was trafficked. Human trafficking is the practice of deceiving someone or taking someone against his or her will, then selling or buying and transporting the person into slavery.

Currently in South Africa, it is not illegal to buy and sell humans. Traffickers can only be prosecuted for kidnapping, specific sexual offenses or forcing child labor. Enforcing the law is difficult, however.

According to local pimps, many police officials support legal experts who created proposals to legalize prostitution in South Africa. The proposals indicate police should be freed to focus on serious crime instead of prostitution, which they consider a petty vice.

“It’s horrible what the sex industry actually does to women,” said Charntel Paile, a Christian outreach worker who ministers among prostitutes in a prominent South African city. “And most of the ladies I work with — I would say 90 percent — are being trafficked”.

“They have lost hope, and they have lost who they are”.  Lisha was no stranger to the perils around her. One client picked her up, had sex with her, then held a gun to her head and took his money back. He pushed her out of the car with no shoes, no cell phone and no money. At a loss, Lisha hitched a ride from a truck driver who picked her up for the price of free sex.

The next night, a man propositioned her and delivered her to an apartment where two other guys were waiting. They held knives to her throat and head, took turns raping her, then tossed her on the streets bleeding and without payment.

Less than a week later, Lisha got in a man’s car, only to pass out immediately when he touched her. Several hours later, she woke up naked in a bush.

Lisha tried to run away, but her pimp came after her. He pulled her into a car, pushed her to the floor, took off his belt, and beat her until she thought she would die.

“They just tell you in your face — straight — ‘There’s your house, here’s your wake-up [time], go to the streets next.’ And you can’t say nothing. You are far from your [home]. You must go, no matter what, whether you like it or not. It’s by force,” Lisha said. “And if you don’t want to go, they beat you well. And you still have to go out after they beat you.”

One human trafficker told bizcommunity.com, “We are not criminals, and we have done nothing wrong. On the contrary, we are helping people help themselves and in the process, helping Africa to eradicate poverty and destitution.” But Lisha did not want this kind of “help.”

“I’m fed up of everything now,” she said to an International Missions Board (IMB) worker who befriended her. “I can’t handle it [anymore]. I’ve had enough. It’s time for me to give my child a chance in my life.”

Lisha’s greatest desire was to build a relationship with her daughter, who lived with an acquaintance in Lisha’s home city.

Lisha’s urgency to flee touched Paile’s heart, and Paile and the IMB worker tried to help her. Paile’s desire is to help prostitutes escape from their pimps, take them to a rehabilitation center and ultimately deliver them to a halfway house where they can learn skills and be reintegrated into society.

Paile shared the story of the woman at the well from John 4 in the Bible.

“She was an outcast in the community … because she had different men,” she said. “But when she had an encounter with Jesus, she changed. She ran to the community, and everyone listened. And these are the very same ladies that we’re working with — the outcasts, the rejected, the ones that have lost being a woman. I know that when they have an encounter with Jesus, their life will never be the same.”

Paile and the IMB worker often shared Scriptures with Lisha and prayed for her. Although she heard the Gospel, she did not respond.

Once more, Lisha attempted to escape. She was desperate. But another trafficked victim reported her to their pimp. Lisha was severely beaten again. In tears, Lisha pleaded with the IMB worker and Paile, “I just need you guys to help me get out of this. That’s all.” At age 33, her body riddled with disease and long-term abuse, Lisha’s pimp took her to a remote part of the city, threw her out and left her to die alone.

Lisha’s story and life ended. Efforts to release her from bondage were not successful, but it is not too late to rescue other girls who are trapped in a life of slavery. We must pray for their release and salvation. –Baptist Press

for more information on this article and a video, visit http://www.bpnews.net/BPnews.asp?id=41997