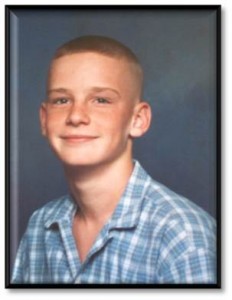 Garison Steele, 14, was a budding actor with a big heart for evangelism. Concerned that all of his friends would accept Christ, Garison had prayed for months that his friend Troy would visit his family’s church in Porter, Texas. Troy accepted Garison’s invitation, partly to return many favors Garison had shown him.

At the end of the  service at Joyful Sound Church, Troy came forward to accept Christ as his personal savior. Garison was ecstatic, and after the service the boys asked if they could go to a local gas station less than a mile from the church. “I told him he better drive safe,” Garison’s mother, Betsy Steele, told Troy. “He was carrying my life with him.”

It was Garison’s first ride with a young, non-family driver. Garison remembered he forgot to say goodbye, and rushed back to the church, told his mom he loved her and kissed her on the cheek.

It seemed to be taking a long time for the boys to return, so Betsy and Garison’s Aunt Jeannie phoned Garison on his cell phone — but there was no answer. Alarmed, Betsy and Jeannie got into Betsy’s car and traced the route Garison would have taken to the gas station.

The two sisters soon saw fire engines and other first responders a short distance from the church. Behind the fire engines was a lone car wrapped around a tree, which happened to be in the front yard of the house where Pastor Betsy and Garison’s father had been married.

Betsy tried to get to the vehicle as soon as she recognized it, and she screamed for police to let her see her son. However, the police restrained her because both boys were killed instantly in the horrific crash.

First responders and neighbors began to ask Betsy, “Who was the third person in the car?”  Several people reported they had seen a third person when the car crashed. But there were only two boys in the car! Betsy, Jeannie, and Grandmother Sally are convinced that third person was Jesus Himself.

Perhaps both boys were carried to heaven in His loving arms.

Investigators determined that Troy lost control of the vehicle when he hit a culvert at a high rate of speed, then the vehicle went airborne. The speedometer inside the vehicle was stuck on 84 mph.

“The boys both wore their seat belts, and alcohol and other drugs were not factors,” Betsy said. “It was just a young driver with his friend in the car making a bad decision.”

Like many parents, Betsy had no idea that car accidents were the leading cause of death for teens. However, statistics show that crashes account for more teen deaths than suicide and homicide combined. Drivers aged 16 to 19 are three times as likely to crash as more experienced drivers.  And carrying passengers exacerbates that risk. Only one teen passenger can increase crash risk by 48 percent.

After a few years of healing, Garison’s grandmother, Sally Pritchard, senior pastor of Joyful Sound Church, felt the Lord calling them to do something about these statistics. Betsy wants to not only to save lives, but to reach out and tell others about the saving love of Jesus Christ.

They soon joined the Teen Safe Driving Coalition and the HEARTS Network, both established by The Allstate Foundation and the National Safety Council.

They also started a driving school, along with a “Garison Steele Safe Driver Elite Award,” a scholarship aimed at steering teens in the right direction. The scholarships award teens who demonstrate safe driving based on recommendations from adults, writing a winning essay on responsible driving, and demonstrating a good example for their peers.

“Parents need to prepare their teens and make sure they demonstrate good driving habits,” Betsy said. “Even good teens make bad choices, and one wrong decision could take their teen forever.”

They hope the scholarship will save lives and honor the memory and testimony of Garison. At an annual church ceremony in his honor, Betsy testified that Garison “carried the light” of God’s love “everywhere he went and many hearts were changed.”

Betsy says that at first she wondered “why God would want me to go outside the church, but then one day while worshipping, I felt that God said I would reach teens that would never set their feet into a church and I would be able to show and demonstrate God’s love, joy, and peace to those teens and their parents, and that is what happened.”