For the fifth consecutive Christmas Eve, Bono and his friends jammed into Grafton Street in Dublin as part of a “busking” songfest for charity. “Buskers” are street performers in the parlance of the area.

On a cool crisp Eve, with a swelling crowd pressing in tightly, they sang on behalf of The Simon Community, a charity that helps the homeless, named after Simon of Cyrene. The organization oversees a number of shelters run by local volunteers.

“Bono! Bono! Bono!” voices in the crush of people cried out, as they tried to get closer to the legendary Irish rock musician, well known for his activism on behalf of Africa and numerous other causes.

“Step back a bit – we’re going to sing songs,” said Irish songwriter Glen Hansard, as he stood next to Bono with a guitar in hand. Hansard is a guitarist for the Irish group The Frames, and half of the folk rock duo The Swell Season.

With Hansard grinning widely, he and Bono launched into a playful holiday song by the rock group Slade, “Merry Christmas Everybody.”

“Are you hanging up a stocking on your wall?

It’s the time that every Santa has a ball

Does he ride a red nosed reindeer?

Does a ‘ton up’ on his sleigh

Do the fairies keep him sober for a day?

So here it is merry Christmas

Look to the future now

Then Bono thanked Hansard for organizing the event and said, “And now for the child that was born in the 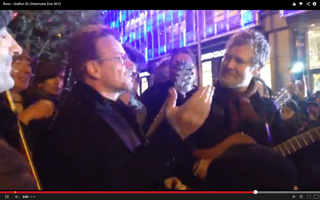 (unintelligible) and straw of poverty I would like to sing an actual carol.”