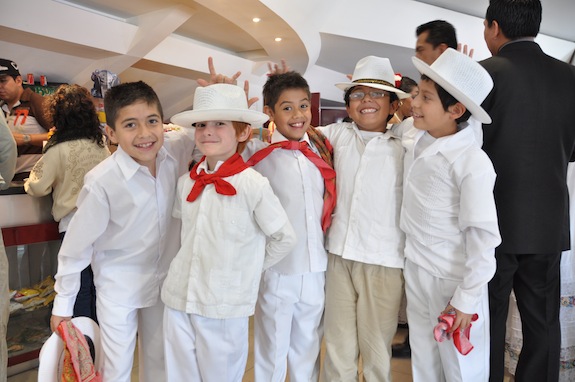 For our Motherhood Around the World series, our fifth interview features Naomi Smith, who lives in Mexico City with her husband and three children—Malachai, 10, Josu, 7, and Selma, 5. Naomi tells us of life as a missionary parent in Mexico.
Naomi and her husband Joshua met at The Masters College, a small Christian liberal arts school in Los Angeles. “We still consider L.A. our home base,” Naomi explains, although she grew up in Mexico. “My parents were Christian missionaries in a tiny town in rural Mexico.” As newlyweds, Naomi and Josh lived in L.A. “We did the whole ‘living on love’ kind of thing,” Naomi laughs. “I recently looked at our budget from back then and it was like, ‘Food=$20 per week.’ ”
Then they went on their own mission to Pamplona, Spain, a medium-sized city made famous by Hemingway and the running of the bulls. They lived in Spain for eight years and had three children.
Then, the Christian non-profit they worked for asked Joshua to take a position as their director in Mexico City. “At first, I didn’t want to go,” Naomi says. “This sounds silly, but I had been so shaped by Europe at that point—the architecture, the food, the aesthetic.
The older I get the more Scandinavian I get: Form and function and everything minimal. And Mexico’s perception of beauty is the complete opposite: vibrant, colorful, over-the-top. More is more! It felt overwhelming.”But after living in Mexico City with her family for the last three years, Naomi has grown to love the city. “We live in an old part of the city that actually looks very European. But truthfully, it’s the Mexican people who have made this city beautiful for me. They stepped right into our lives and invited us into theirs.””I’d meet other parents at my kids’ school and say, “Let’s have dinner.” And they’d actually come over! That never happened in Spain, which felt like such a private culture. You had to know someone forever before you would ‘impose’ like that. In Mexico, it’s all about gathering with friends for dinner on our rooftop at night and laughing and talking right through dessert.”
On everyday poetry: Latin culture has a reputation for being romantic, and I see that even in the little ways people speak to one another. In Spain, if you want to order a coffee you’d say “Dame un café,” or “Give me a coffee.” In Mexico you say, “Good morning. How are you doing? Can you please gift me a coffee, if you can?” And my friends speak in such romantic ways. My Mexican friend was telling me about when she and her husband first started dating. She said, “It was the time of life when you would reach into the sky and pull down stars for each other.” Another friend was describing a breakup and she said, “I cried an ocean of tears.” They actually say those things! It is awesome.
On greetings: Mexican mamas do this really great thing where they teach their children to greet adults with a peck on the cheek. It doesn’t matter if the child is 2, 12 or 22. It doesn’t matter if the child runs into you at the local market or comes into your home for dinner. A well-mannered child will always saludar bien—greet properly with a kiss. Sometimes I laugh at how even though children may run wild through the course of a playdate, there is always a pause at the beginning and at the end for this proper greeting. I’m so glad to embrace that custom. I adore how, in this pause, even little ones acknowledge the importance of friendship.

On grooming habits: When my kids first started school in Mexico, I was surprised how involved the school was in our family’s grooming habits. Our kids were often sent home with little notes saying that they needed to come to class more neatly combed! Then, once we got the combing down, we got a note saying they needed to be combed with hair gel, not just water. Their report cards even had a line item for “personal hygiene.”

On the love of history: My kids go to a local Mexican school, and it seems like they perform in a special history program almost every month. Children dress up in traditional garb or as political revolutionaries, and they enthusiastically sing, dance, recite poetry and perform plays depicting important historical events.

I was once talking with a fellow mom about how my husband and I were trying to understand our children’s interests so that we could help them find a job they would love as adults. I jokingly moaned that my son only liked history but that he could never make a living off of that. My friend looked at me, shocked! “No!” she cried. “In Mexico, historians are highly valued and never have a hard time finding a job!”

On fruits and vegetables: While Mexican children certainly eat their fair share of processed, sugary treats, I find that as a whole, the children we know consume a tremendous quantity and variety of fruits and vegetables. Sometimes it’s jicama on a popsicle stick, or grated carrots and sliced cucumber, or a cupful of papaya, pineapple, and mango.

In fact, the school just down the street from our house has a colorful little cart that magically appears in front of the school gates just before school gets out every day. As kids leave school, they can request the fruit they want and it gets peeled, chopped and sprinkled with lime and chili powder right in front of them.

On redheads: When we first got to Mexico, I would walk behind my family so I could watch passersby turn, look at us and then jump and squeal. It happened over and over again. I finally asked a friend, who confirmed to me that people were pinching each other! Apparently, when Mexicans see a redhead, the first one to pinch a friend gets a wish.

We hang our laundry on our rooftop, too. Every time, I mentally whine about having to lug our clothes up four flights of stairs, but once I’m on the roof I stop pitying myself, and start pitying people in other parts of the world for not getting such a magnificent view while they do their laundry. My kids beg to go up with me, and so we end up making it a bit of a family affair—they ride their scooters, build forts and play tag around the roof while I hang up the clothes.

On street art: Diego Rivera, one of Mexico’s most beloved artists, believed that art should be enjoyed by everyone—especially the working class and the poor. So he dedicated himself to painting murals in public spaces. Mexico City is all about this idea of “art for the people.” Every day we pass the enormous mural along the exterior wall of the local cinema, the display of giant Samurai head sculptures along the street in our neighborhood and the brightly painted birds on the building next to ours.

On wealth extremes: A few months after arriving in Mexico City, I found myself at a Starbucks in a ritzy neighborhood. I had a good book with me and figured that I’d indulge in an hour of reading and praying before I had to head back to my side of town. As I sat there in my jeans and T-shirt, I grew increasingly aware of the people walking into Starbucks. Many had chauffeurs in luxury vehicles parked outside; they wore Italian leather boots with matching handbags. Every woman seemed to have an expensive haircut and lots of bling. I felt so out of place.

I panicked; I had to get out of there! I didn’t belong! So I grabbed my cup, ran out to the street, and hailed the little passenger van that would take me home. (These vans are a cheap, common form of public transport—essentially gutted minivans rebuilt to cram in as many people as possible.) And there I sat, gripping my Venti cappuccino, crammed into a six-passenger van with 15 women who had probably never stepped foot into a Starbucks; women who probably fed lunch to their entire extended family with the same amount of money I spent on my coffee. And suddenly…I again felt so out of place.

That day captured one of my biggest struggles living in Mexico City: the tremendous class differences. From one street to the next, we find ourselves thrust into extreme wealth or extreme poverty. This constant juxtaposition of excess and need keeps my heart and mind racing, pushing me to evaluate what I own and why I own it; pushing me to ask myself if I find my identity in my belongings or social status; forcing me to dig deeper into what genuine need is, and what we as a family can do to care for people in need.

This self evaluation is often uncomfortable, but even so, I am thankful that my family is having to wrestle with these questions. The discussion itself makes us richer.– A Cup of Jo