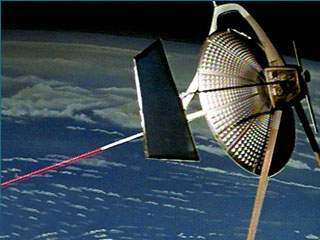 The JESUS Film* has aired on SAT-7, since 1996, when SAT-7 only broadcast a few hours a day in North Africa. It was in those early days that Reem Kairouan, living in Tunisia, saw the JESUS Film on SAT-7 and began her faith journey.

And she has been one of many that have tuned into this unique satellite television outreach that is providing hope and encouragement to the believers of the Middle East, North Africa, and many other surrounding countries.

According to a news story from SAT-7 USA (www.sat7usa.org), for the past 17 years, through SAT-7, the JESUS Film has led countless people to the saving knowledge of Christ’s sacrifice.

The film became personal for a woman from Iran, who wrote, “I have watched the JESUS Film and I can feel the nails in His hands. I know that He was crucified for me. Thank you for introducing Him to me.” The crucifixion scene in particular has piqued the interest of viewers who have never before heard the name of Jesus.

In the neighboring country of Afghanistan, a group of women were gathered, intently watching the JESUS Film on SAT-7 PARS. They were inspired. They came away from the movie with many questions and turned to a Christian aid worker in their town for answers. The aid worker did not speak Dari well, their dialect of the Farsi language. She advised the women to pray and ask Jesus their questions directly.

The Afghan women began talking to Jesus — and He responded. Jesus visited some in their dreams at night and some during the day to answer their questions. Sometime afterwards, an Iranian Christian couple moved into town and started ministering to them. The couple taught the Bible, in the Dari dialect, to their new friends.

The JESUS Film teaches the life of Jesus to people who may not know much about the Bible, but are seeking knowledge about God. It is a thought-provoking introduction to a deeper relationship with the Lord. SAT-7 has consistently aired the JESUS Film in Arabic, Farsi, and Turkish languages. It has also appeared on SAT-7 in the French, Kurdish, Kabyle, and Tamazight languages-which are spoken in various regions of the Middle East and North Africa. Over a period of just 3 years, SAT-7 aired the JESUS film over 300 times!

Viewers who have watched the JESUS Film continue to watch SAT-7 for other programs that help them continue to grow in fellowship with other believers.

In fact, God is using SAT-7 to reach millions of people across the Middle East and North Africa, and their lives are changing as a result. Here as some of their viewer testimonials:

“Usually, every Sunday, I go to church. But because of my surgery, I was home. I wanted to find a Christian TV channel and I found Dandelion for the first time and I loved it.” (A SAT-7 PARS viewer, who is battling cancer)

“Please send a copy of the Holy Bible. I have no other way to get this godly book to tell me how Jesus lived in dangerous times. Pray I’ll have strong faith.” (A viewer in Iraq)

“My children are safe with your Christian channel. Thank you for taking care of our children. Peace of Christ be with you.” (A Palestinian mother)

“Every time I feel alone in my country, Algeria, I read your messages and I am encouraged.” (A SAT-7 KIDS viewer)

“I thank God because he saved me from death a number of times. I need your prayers because I am a military soldier in a heated region.” (A Syrian man)

According to the “JESUS” Film website (www.jesusfilm.org), every eight seconds, somewhere in the world, another person indicates a decision to follow Christ after watching the “JESUS” Film.

Every eight seconds… that’s 10,800 people per day, 324,000 per month and more than 3.8 million per year! That’s like the population of the entire city of Pittsburgh, PA coming to Christ every 28 ¼ days. And yet, if you are like many people, you may have never even heard of it.

Called by some “one of the best-kept secrets in Christian missions,” a number of mission experts have acclaimed the film as one of the greatest evangelistic tools of all time. Since 1979 more than 200 million men, women and children worldwide have indicated decisions to follow Jesus after viewing the film. In addition, through hundreds of partners an estimated 10+ million decisions have been made as the film “JESUS” is used extensively by the Body of Christ worldwide.

Based on the Gospel of Luke, the “JESUS” Film has now been translated into more than 1,160 languages, with new languages being added every month.

“This allows God’s Word to speak to people in more than 200 countries in languages they know and understand. By God’s grace, it is yielding a spiritual harvest of unprecedented results,” said a spokesperson on the website.