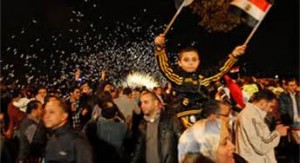 CAIRO, EGYPT — This country is nothing if not deeply polarized. And despite the rhetoric on both sides, neither the loyalists, who still support ousted Islamist President Mohamed Morsi, nor those who back the military intervention have a clear mandate to move forward.

One thing is for sure though: While those turning out to support Morsi are almost exclusively Muslims, the crowds at the military-sponsored demonstrations are much less religiously homogeneous. Still, it is hard to miss the surfeit of people wearing crucifixes and bearing traditional Coptic Christian tattoos milling about in Tahrir Square and outside the presidential palace, areas that have been occupied by anti-Morsi demonstrators.