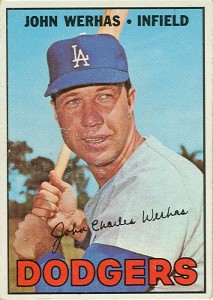 Gifted in several sports, John Werhas graduated from USC as an All-American and had the opportunity to play for the L.A. Dodgers or Lakers. He chose baseball, but later — as his athletic career began to wind down — an emptiness inside led him to ponder life’s greatest questions.

“Athletics was everything to me,” says Werhas. “Since I was a little boy, all I dreamed about was playing baseball in the big leagues.” When Werhas first ran on the field in Chavez Ravine as a Dodger third baseman in 1964, the team was coming off a phenomenal year when they beat the Yankees in the ’63 World Series.

Shortstop Maury Wills had already made crime pay by stealing 236 bases in his first five seasons with the Dodgers.

Werhas was scared to death when he first took the field. “My heart was beating out of my uniform,” he says. With his hands shaking, he got his first base hit, but his big league career was short-lived.

“I was sent back to the minors where I really belonged,” Werhas recalls, after he batted .169 with eight RBIs in his first 33 games.

Werhas ended his baseball career in an idyllic setting, playing for the Hawaii Islanders. A friendship with broadcaster Al Michaels helped him land a plum sports casting position with an NBC affiliate in Honolulu after he left his field of dreams.

“All my friends told me I had it made, that I had life by the tail,” Werhas recounts. “None of them knew there was an emptiness growing inside me, but I didn’t know how to deal with it.”

Werhas lived in a magnificent penthouse apartment serviced by a private elevator overlooking Waikiki Beach and Diamond Head  One day he stepped off the elevator in the lobby and ran into actor Bob Turnbull, also known as the “Chaplain of Waikiki Beach.”

Turnbull had acting roles in “Hawaii 5-0,”  “Petticoat Junction,” “My Three Sons,” and “Tora Tora Tora” before he started a dynamic outdoor church that met on Waikiki Beach.

“Hey, John Werhas, I’ve watched you on TV. How is everything going in your life,” Turnbull asked a surprised Werhas.

“Great. It couldn’t be better,” he said.

Something in the response didn’t resonate with Turnbull. “Really? How is it really going?”

Werhas dropped his guard, and proceeded to tell Turnbull about an emptiness that had been gnawing at him.

“I can relate to that,” Turnbull said. “Some years ago I felt like that, but something happened to me and now I’m the happiest guy on the face of the earth.”

“What happened to you?” Werhas asked, his curiosity aroused.

“Yeah, God did,” Werhas said casually, “but why are you so happy?”

“It’s God. I have come to know Him personally.”

Werhas leaned back slightly, his eyes widened, and his first reaction was that Turnbull might be crazy. It was all Werhas could do to keep from laughing. “Hey, I’ve got to go,” he said abruptly and left.

But that first meeting led to other “chance” encounters around town. On one of those occasions, Turnbull invited Werhas to a party.

“I went to the party and had the best time. It was unlike any party I had been to on the island,” he recalls. “There was a peace there. I saw something in their faces I had never seen before.”

Before Werhas left that night, he pulled Turnbull aside. “You’ve got some great friends,” Werhas said.

“Everyone here is a Christian,” Turnbull replied.

“Me too,” Werhas said, matter-of-factly.

“If you were born in a garage would that make you a car?” Turnbull asked. Turnbull disappeared for a moment into another room, and then returned with a Bible, which he handed to Werhas. “I’d like you to have a look at the Book of John. See what our Lord says about happiness and about being a Christian.”

Several nights later, Werhas pondered that previous conversation. Am I really a Christian? he wondered. At one point in his life he didn’t believe in God at all, but came to the conclusion that was foolish.

Werhas reached for the Bible Turnbull gave him. He had no church background, so it took him a few minutes to find the Book of John.  He read John 1:1: “In the beginning was the Word, and the Word was with God, and the Word was God.”

That makes no sense, he thought. He had no background talking to God, but he decided to pray a simple prayer, “Lord, I would love to know if I could know you…”

Suddenly a realization entered his mind: Jesus is the Word; The Word is Jesus.

He read a few chapters ahead and landed on John 3:16: “For God so loved the world that he gave his one and only Son, that whoever believes in him shall not perish but have eternal life.”

He was also struck by John 10:10, when Jesus said “I came that they might have life, and might have it abundantly.”

Werhas got together with Turnbull the next day. “It says in the Bible that as many as receive Him are called children of God. So I guess that makes me a Christian,” he said.

“To your knowledge, where is Jesus Christ in your life?” Turnbull asked.

Werhas thought for a moment. “He’s in my church… so I’m going to start going more often.”

Then Turnbull repeated the same question. “To your knowledge, where is Jesus Christ in your life?”

“He’s in heaven…I remember praying to him a few times during ball games.”

“That’s true. He’s seated at the right hand of the Father. Some day He’s going to come back and judge the world.”

Then Turnbull repeated his question a third time. “To your knowledge, where is Jesus Christ in your life?”

What’s with this guy, Werhas thought to himself. Is he nuts? Growing more frustrated by the minute, he said, “How can anyone really know? Isn’t it enough that He’s in heaven or in church? Why is it so important to know He’s in my life?”

Turnbull flipped open his Bible to 1st John, chapter five. “And the witness is this, that God has given us eternal life, and the life is in His Son. He who has the Son has the life; he who does not have the Son of God does not have the life.”

“That’s why I’m asking,” Turnbull continued. “Apart from Jesus Christ, no one has life.”

A critical, rebellious spirit suddenly rose up in the ex-ball player’s heart. “How can you know that? Have you spoken to God? Who are you to say I have to come only through Jesus?”

Turnbull turned to the last book in the Scripture and read, “Behold, I stand at the door and knock; if anyone hears my voice and opens the door, I will come in to him, and will dine with him, and he with Me.” (Rev.3:20)

“Would you like to ask Jesus into your heart right now?” Turnbull asked.

Werhas thought for a moment, but he was still too prideful to submit his life to Christ. “No,” he said. I don’t want to bow down to anybody, he thought.

The former Dodger went home and over the next few weeks a battle for his heart and soul began to rage. Werhas wrestled with a hundred

conflicting thoughts and emotions. Who is Jesus Christ? Do I know Him and do I have to know Him? Is there a heaven? Am I going there?

Werhas settled on some core truths. “I knew I was a sinner and if I died I would go to hell,” he recalls.

Finally he realized that if there is a heaven and hell and there is a Savior, then he needed Him. “On March 12, 1973 I fell to my knees and asked Jesus Christ to come into my heart and change my life and to forgive me of my sins.”

“There was no thunder or lightning. No rushing wind came in the room,” Werhas recalls. His salvation was based on his faith and trust that Jesus is who He claimed to be.

John Werhas pastors The Rock Community Church in Yorba Linda, California, where he preaches the Word of God “line upon line.” Pastor John and his wife, Kay, have been happily married for over thirty-five years.

Bob Turnbull and his wife Yvonne founded Turnbull Ministries, which is dedicated to providing help and hope to marriages and families.