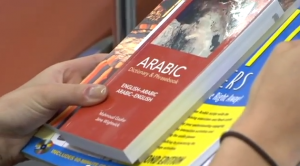 In an unnamed Middle East country, Sue has been studying Arabic four days a week with one of her husband’s friends. A silly misspelling during one of her sessions launched a thought-provoking spiritual conversation.

As Sue practiced writing her name under her instructor’s watchful eye, she stopped when it became clear she made a mistake.

“Oh no!” her teacher said quickly. “That is djinn.” The teacher’s thumbs punched away at the dictionary in her mobile phone and

up popped the word demon.

“Demon,” she said. “Do you believe demons, they are real?”

The instructor blinked. “All followers of Isa, they believe?” (Isa is the Arabic word for Jesus.)

“Yes—the Injeel (Bible) has stories of how Isa al-Masih cast three demons out of people. He has power over them.”

The teacher hesitated. “Have you ever seen a demon?”

“When I was living in the Congo,” Sue said, recalling her childhood as the daughter of missionaries.

She said a young man came to visit her father. “There was something strange about him,” Sue recalled. “Suddenly, the boy’s voice changed and he spoke in somebody else’s voice! It was the voice of a demon inside him.”

“Oh!” It seemed to sink in that Sue really did believe in demons. “Yes, sometimes demons, they live inside people,” she continued.

“How—how do you make them go out?” Sue’s teacher asked, her eyes widening.

“Isa al-Masih,” Sue said. “Praying in his name. He has power over them, and he can make them leave.”

The language session ended shortly after this brief detour into an unexpected area. Sue refers to such encounters as “stones in shoes.”

Her prayer is that God will provide more openings for spiritual dialogue, and He will open her teacher’s eyes to the Word of Life.