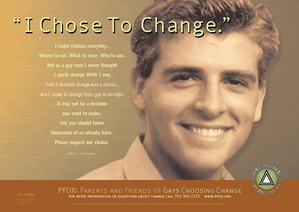 She loves her homosexual son as much as her heterosexual children, yet she maintains a firm stand against redefining marriage.

“We love each other unconditionally,” says Regina Griggs, executive director of Parents and Friends of Ex-Gays & Gays (PFOX). “We have a very close relationship even though we don’t agree on gay marriage,” she says. “It is not easy, but as a responsible parent I must stand firm in my belief that marriage must remain between a man and a woman.”

Griggs recently spent three days visiting with her gay son, now grown and out of the house.  To maintain family harmony, they avoid discussion of some subjects. “We can’t discuss politics, religion, or homosexuality,” she admits.

Parents must communicate to their children, “I can love you unconditionally and still disagree with you,” Griggs says.

While a compassionate response is important to her, the greater good of society is also important. “What I think is best for society may seem like lack of support for homosexual people. Not so,” she says. “We must look to what is best for the culture as a whole.”

“All of my children, homosexual and heterosexual, benefit by living in a free society that is made possible only by legal and cultural encouragement of strong, mother-father-based families,” she adds.

Griggs does not believe homosexuality is genetic, but offers hope that change is possible, even if her son has not embraced her message. Her organization, PFOX, doesn’t offer therapy or counseling. It advocates and supports individuals who choose to walk away from the homosexual lifestyle.

“We don’t label children based on who they are attracted to—feelings can and do change,” she notes.  “We allow for differences of opinion; we do not place requirements on our children nor do they place them on us.  That’s what unconditional love means—loving each other even when we do not agree.

“God created them male and female,” Griggs says, quoting the words of Jesus in Matthew, chapter 19. “Genes don’t cause us to have attractions. Your identity is not who you are attracted to.”

“We try to let people know it is not immutable,” she says. “The scientifically reinforced fluidity of sexual orientation and gender identity may help to explain why, as even the American Psychological Assn. has acknowledged, thousands of people have ‘altered their sexual orientation’ with ‘varying degrees of satisfaction and varying perceptions of success.’ It is no longer open for serious debate.”