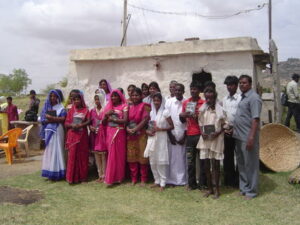 Our partner South India Gospel Outreach (SIGO) is reaching the Lingayats, a people group who lives in the South Indian state of Karnataka. Eleven million Lingayats live in Karnataka, yet only about 5,500-6,000 know the truth of the Bible.  Though you may not have heard of them, the Lingayats are the 12th largest unreached people group of India. The Lingayat come out of a Hindu tradition, but the founder was opposed to animal sacrifice, caste hierarchy, and societal divisions, and thus the Lingayats hold a number of beliefs that stand in stark contrast to traditional Hinduism.

Our partner Pastor Mallanna, the leader of SIGO, has been serving the Lingayat people for many years. He came to know the Lord when a classmate in college gave him a copy of John’s gospel. He was powerfully affected by what he read and later put his faith in Christ. Immediately after his family discovered he had become a Christian, he was expelled from his home.

Today, many years later, Lingayat believers are facing the same challenges. In fact, over the last three years, SIGO’s house churches have faced increased opposition and attacks. However, they have also seen encouraging results such as new believers being baptized and new house churches starting.

One of these new house churches began with a young man named Manjunatha. He is 21 years old, married, and works as a farmer. From childhood, he followed the religious practices of his parents. But then one day he met one of SIGO’s evangelists. This evangelist was visiting Manjunatha’s village to distribute a tract called “Darkness to Light.” (Your gifts through Partners helped print this tract.) Manjanutha accepted the tract, but since he had a long day of labor ahead of him, he placed the tract unread by the television, then left to work on his farm.

Later that day, Manjanutha’s parents saw the tract sitting by the TV. They asked their daughter-in-law what it was. She said she didn’t know, but since his parents were illiterate she volunteered to read it to them.  Page by page, she read the booklet to them. The testimonies of Lingayats finding new hope and life in Christ stirred their hearts. When Manjunatha returned home from the fields, his parents narrated to him what they had learned from the tract. Curiosity increased in the family as they discussed what this new information could mean in their lives.  The next day Manjunatha met with the SIGO evangelist who gave him the tract. The Gospel was shared and the entire family came to know the Lord. Since then, the family has been baptized, and a small prayer cell has started in the village.

The state of Karnataka is a key state for ministry in India as it is currently ruled by a political party which opposes the spread of the Gospel. “An anti-conversion bill is before the parliament and president to approve,” said Pastor Mallanna. “In spite of persecution all over the state and false accusations against village evangelists of forced conversions, the Spirit of God is leading His chosen ones to further His eternal Kingdom.”