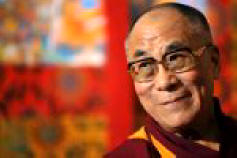 AsiaNews reports the Tibetan leader is warning against proselytism, what he believes are the potential cause of problems that arise between different religious communities, and is recommending that no conversions be allowed.

The murder of missionary Graham Staines and the massacre of Christians in Orissa and Karnataka are taken as examples of the negative fruits of conversions.

Meanwhile, Jesuit priest, Cardinal Oswald Gracias, president of the Catholic Bishops, said Graham Staines was not proselytizing, and that in Orissa state the fight against Dalits has social roots.

Cardinal Gracias said the freedom to preach, propagate the faith and convert is guaranteed by the Indian Constitution. “You cannot compromise a principle so fundamental out of fear or for convenience,” he said.

AsiaNews says that in an attempt to condemn bad proselytism, the spiritual leader of Tibetan Buddhism said he was against conversions and changing from one religion to another.

AsiaNews commented: “In this way, his position is likely to be seen as support for the policies of the radical Hindu groups and the anti-conversion laws that exist in some Indian states.”

Cardinal Gracias, who personally knows the Dalai Lama, told AsiaNews that the freedom to change religion is a fundamental human right and cannot be obscured for any convenience.

On January 23, the Dalai Lama visited the St Xavier’s College in Mumbai, at the invitation of the Dean, Fr. Frazer Mascarenhas.

In front of students and professors, he gave a speech on “Ethics: educating the heart and mind.”

During his speech, he touched on the issue of conversions. “I do not like conversions,” he said, because they have a negative impact [on society].

“The two parties, that of the converted and the community abandoned by him, begin to fight,” AsiaNews the Dalai Lama as saying.

The AsiaNews report said that as an example of the negative influence produced by conversions, the Dalai Lama cited the violence against the Australian missionary Graham Staines, burned alive in his car with his two sons, and the violence and destruction still ongoing in Orissa and Karnataka.

The Dalai Lama has, however, reiterated that religious freedom — the freedom to practice one’s faith — should be guaranteed to all, the news agency said.

According to AsiaNews, this is not the first time that the Dalai Lama has spoken out against conversions.

Last November, at Christ University in Bangalore, he repeated a similar concept: on the one hand, he spoke of religious freedom and on the other of the need to avoid conversions: “Any religion,” he said, “should be limited to service-oriented interventions, such as providing people education and health care, not indulging in conversions. ”

AsiaNews commented that it is likely that the Buddhist leader just wanted to warn against a proselytism that manipulates people, promises economic benefits, or leads people to change their religion through threats.

But, the news agency said, according to many Catholics in Mumbai, his statements are similar to those of Hindu extremists who, behind the specter of proselytizing, condemn all conversions.

The news agency reports that already in several states of India, there are anti-conversion laws that require state verification. But these laws have in fact become a way to curb conversions (usually from Hinduism to Christianity or Islam, the reverse is not a problem).

Indian Catholics are saddened that the Dalai Lama has cited as an example of “proselytism” the case of the missionary Graham Staines.

AsiaNews noted that the meeting with the Buddhist leader happened on the 14th anniversary of the murder of the Australian missionary, which took place in Manoharpur (Orissa).

Fr. Errol Fernandez, SJ, dean of economics at the College, expressed his doubts.

“If he meant to say that the murder of Graham Staines is the result of conversions [proselytizing], it would be too simplistic. Judge Wadhwa who led the committee, appointed by the then Minister LK Advani to investigate the killing of Staines, clearly showed that the missionary was not involved in any proselytizing.”

Last December, Fr. Fernandez preached at a retreat for priests in Kandhamal, Orissa.

He stated to AsiaNews:”Having seen firsthand the things in Orissa, I can say that conversions are only rarely the cause of violence and chaos. The real reasons lie in the fact that the Dalits and other poor social classes are educated to fight for their rights and their freedom from all forms of oppression. This has repercussions on those who want them to remain as they are, the bottom rung of the social economic and religious ladder.”

Cardinal Oswald Gracias, president of the Catholic Bishops, has also spoken on the issue, noting that “the Christian point of view (is that) we cannot but proclaim the Good News” and thus do mission.

He told AsiaNews: “I met the Dalai Lama on several occasions and I think he is a sincere person. Perhaps, the Dalai means to say, do not rock the boat, do not create problems for yourselves and for others, but this implies compromising on a very sacred principle and absolutely, we cannot compromise on a very sacred principle, and we certainly cannot compromise for the sake of convenience.”

He added: “The Constitution guarantees every Indian religious freedom, the right to preach, practice and propagate their religion and the right to convert.”

“From the international point of view, religious freedom is a basic human right and it implies the right to decide how people want to express their faith.”