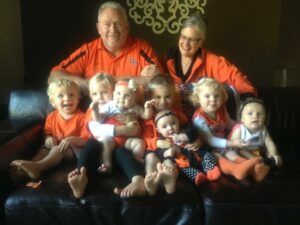 After a seemingly routine and successful prostate surgery, Pastor Charles “Chuck” Kelley returned home after a brief stay in the hospital. Little did he suspect an oncoming health crisis that would nearly take his life.

“I felt the surgery was a great success and felt so happy,” says Kelley, president of Bridge Builders International. But a few days later, he developed a fever of 102.7 degrees. “I felt a bit sick but I wasn’t so concerned about it.”

Because of the recent surgery, his wife, Nancy, urged him to go to a small urgent care clinic nearby. The doctor there was worried enough to send him back to Good Samaritan Hospital in Corvallis, Oregon, where he had the surgery.

Kelley underwent five hours of tests in the emergency room, which revealed a small infection in his bladder and an elevated white blood count, indicating the infection was in his bloodstream. “I expected the chief doctor to give me some pills and send me home.  I really didn’t understand the urgency of this condition and I was not happy.”

He moved into a standard hospital room and began to receive antibiotics intravenously. It was 2:30 in the morning. Unable to sleep, with IV needles in both arms and feeling extremely cold, he got up from the bed to search for more blankets.

“Suddenly I started to shake and Shake and SHAKE. I couldn’t talk,” he recalls. A young nurse saw him and cried out for help from other nurses. It seems his temperature spiked to 107, a dangerous condition for adults.

A staff alert for sepsis (blood poisoning) was called. “I was delirious, hot, freezing, incoherent and extremely anxious.” While Kelley couldn’t speak, he mouthed silent prayers to his Rescuer and Redeemer.

One nurse held his hand and told him he would be OK. The other nurse echoed the same words. Delerious, scary images flashed before his eyes and then he heard someone say, “OK, let’s cut his neck.”

What in the world could that mean? he wondered. Is this what it feels like to die?

As his life hung in the balance, Kelley passed out. When he awakened sometime later, he was in the intensive care unit, lying naked in a bed of ice, covered by a wet sheet with a huge fan blowing over him. Despite the frigid conditions, he felt no sense of the cold.

Apparently, he suffered a full seizure. Doctors cut several openings to insert huge IV needles. The largest one was in his neck. Four of the needles were then secured in place with sutures. Suddenly he realized “let’s cut his neck” was not a dream.

“I was so shocked this had happened. My recovery from surgery had been going so well,” he notes.  The next morning the doctor informed him that if he had been anywhere but the hospital when his crisis hit, he would not have survived.

“I was delirious quite a long time,” Kelley recalls. “My mind was dysfunctional.” Another pastor came to pray with him but Kelley didn’t recognize him and could only follow a fraction of what he said.

His delirium continued for a few hours, then he began to improve quickly. One of his nurses, Cathy, prayed for him with deep sincerity. She said ‘amen’ and tears began to roll down both their cheeks.

As Kelley convalesced in his hospital bed, he began to seek God for answers. Why did this happen, Lord? he asked.

In the following days, his strength slowly returned and he took his first walks through the corridors of the hospital. He found a waiting room at the end of the hall and went in to relax. He saw a young woman in her twenties sobbing. “What happened?” Kelley asked.

She told him that earlier in the day she and her boyfriend had an argument and he took a handgun and shot himself in the head…straight up from inside his chin. Miraculously he survived the suicide attempt and was now in intensive care. Her boyfriend’s sister entered the waiting room and she too was crying.

“Soon I noticed another lady was in the room, about 65, also crying. Her husband just had brain surgery. He had several strokes and they removed a large portion of his lower brain.” His chances for survival were slim and she was distraught.

Suddenly Kelley remembered he asked God why he was in the hospital. “I felt a strong prompting to pray with them, just like so many are praying for me. This urge to pray with them was especially strong and I recognized it was something important.”

Still dressed in his hospital gown, with heart wires and intravenous tubes protruding, unshaven for days, God prompted him to ask more about their stories. Kelley showed them a photo on his phone of himself and Nancy with their grandchildren.

“That broke the ice. The young lady showed a photo of her boyfriend and their seven-month-old boy, who is blind.”  The older woman shared some photos as well.

“I told them that I came very near to death on Thursday. I shared about how the Lord gives surprising strength during times of tragedy and this is something they could experience too.”

Then the older woman asked him to pray. “I held her hands and prayed and prayed. We finished and then she encouraged the younger woman to receive prayer

“She came over and we prayed and prayed. We all were crying. They were grateful and touched. I was so surprised at what had just happened. There was a holy sense of God’s presence,” Kelley says.

The next morning he went for a walk to see if the women were still there. The room was empty. “I don’t know if the two men are dead or alive or vegetative. I may never see the ladies again. But I am glad that I was a position to share some love, hope and sincere prayer. Certainly the Holy Spirit continues His work in their hearts,” Kelley says.

“I don’t know a lot of things. But for a few minutes that night I was God’s special representative to absolute strangers…and there is joy in that. I’ll never forget it. This would not have happened apart from my near death experience days ago.”