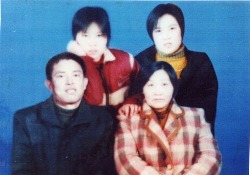 The founder of the South China Church, serving a 19-year prison sentence, has suffered a stroke that has left him paralyzed and unable to speak, but prison officials have refused the family’s request to release Gong Shengliang on medical parole.

ChinaAid received an urgent appeal letter Thursday evening from Gong’s family in which they detailed Gong’s condition and their efforts to secure his release on medical parole. (The full text of the family’s letter and medical parole petition is provided below.)

Gong, who is in his 60s, suffered a stroke at 8 p.m. on Dec. 2 that left him paralyzed on the left side, unable to speak and drooling from his mouth. It was not until the next afternoon that Gong was taken to a hospital to be treated and to confirm that he had suffered a stroke. He was then transferred to the Wuhan municipal prison. Family members were not notified of these developments until Dec. 7, whereupon they immediately asked to go see him. The prison said that a visit could not be arranged until Monday Dec. 10.

At that meeting, Gong needed the assistance of two people, one on each side to hold him up, in order to enter the visitors room. When they seated him, he was unable to sit upright and kept sliding off the chair. He was also drooling and unable to speak.

The next day, the family submitted a request for Gong to be released on medical parole, but was told that his condition did not meet the requirements for medical parole. Gong’s family had requested medical parole on previous occasions as his health over the years has declined, but had been rejected each time. His two daughters have also been refused permission to visit their father.

“We ask brothers and sisters from churches everywhere to extend a helping hand to our teacher Gong Shenliang, whose life is at stake, to pray for him…and pay attention (to his case), so that he can be released on medical parole as soon as possible and receive timely treatment,” the family said in the appeal letter received by ChinaAid.

Gong was one of 17 South China Church leaders convicted and sentenced in December 2001 of “using a cult to undermine law enforcement.” Gong and four others were given the death sentence. But as a result of the ensuing international outcry initiated by ChinaAid founder and president Bob Fu, a higher court revoked the death sentences in September 2002, citing lack of clarity about certain facts and insufficient evidence. The case was retried in October 2002, and instead of the crime of “using a cult,” the five who had been condemned to death were convicted of “intentional assault” and sentenced to life imprisonment. Gong was also convicted of rape. His sentence was commuted in 2006 to 19 years in prison.

See our earlier report on his case:
www.chinaaid.org/2007/08/jailed-south-china-church-founder.html

The South China Church under Gong’s leadership was a source of controversy because of Gong’s personal conduct and questions about the orthodoxy of some of his teachings. After Gong’s imprisonment, some church elders left the church and set up independent churches, but the South China Church has continued to meet and has accepted the teaching of other, more orthodox pastors. Its numbers are slightly lower than the 100,000 members at the time of Gong’s imprisonment.

“Regardless of his past moral issues in the church before his imprisonment, Gong should be treated humanely, in accordance with Chinese law and international standards for treatment of prisoners,” said Fu. “We appeal to the Chinese authorities to grant the Gong family’s appeal to provide urgent medical treatment for Gong and to allow his two daughters to visit their critically ailing father.”

Fu’s experience and success in advocating for Gong was the impetus for his establishing ChinaAid in 2002 to draw international attention to China’s gross human rights violations against house church Christians, and to monitor and report on religious freedom violations in China.

The family’s letter of appeal and petition for medical parole:

As we write this letter to you, our hearts are bleeding, tears flow from our eyes and our hands are trembling….

Teacher Gong Shengliang (originally called Gong Dali) was born on May 20, 1952 and lived in Zaoyang, Hubei province. He is the founder of the Chinese Christian Huanan (South China) Church.

Teacher Gong has been a believer of Jesus since childhood and is a devout Christian who loves the Lord. At the age of 17 (in 1969), he was called by the Lord to preach the Gospel. He is the third generation of Christians in his family. American Baptist missionaries preached the Gospel to his mother and his maternal grandmother, who were saved by grace and baptized as Christians in the 1920s and 1930s.

Teacher Gong not only preached the Gospel, he also led people to repent and turn to God and founded the South China Church, for which he was attacked, persecuted and arrested by the Chinese authorities.

Teacher Gong was arrested on August 8, 2001 in Jingmen, Hubei province, and given two death sentences by the Jingmen Intermediate Court on the charges of “organizing and using a cult to undermine law enforcement,” “intentional harm,” “rape,” etc. Later, as the result of the prayers, concern, care, efforts and help of Christian brothers and sisters, care and concern from people from all walks of life and the reports in the international media, God heard our prayers and Teacher Gong’s death sentence was commuted to life imprisonment, which was commuted again on April 13, 2006, to 19 years in prison. He is serving time at Hanxi Prison in Wuhan, Hubei province. On the afternoon of the 3rd of this month, he was sent to Wuhan’s Hongshan Prison because he was in critical condition.

Teacher Gong has now been imprisoned for more than 10 years and he is in his 60s.

Authorities have refused medical treatment when he became ill and his health has been deteriorating. Teacher Gong has long been wanting to see his two daughters but cannot because the authorities won’t issue ID cards to his two children and the prison refuses to allow them to visit on the excuse that they don’t have ID cards. This is another way they are tormenting Teacher Gong in both mind and body. His worries about the brothers and sisters in the church have also contributed to his deteriorating health. Because of this, his family has made several requests for the prison to provide medical treatment and to release him on medical parole, but all the requests were rejected. At about 8 p.m. on the 2nd of this month, he suddenly became very sick and his condition became critical. He couldn’t speak, was drooling, and was paralyzed on the left side of his body. On the afternoon of the Dec. 3, he was sent to a hospital for examination, and the diagnosis was cerebral infarction and high blood pressure. Then, he was transferred to Wuhan’s Hongshan Prison.

On Dec. 7, Teacher Gong’s family learned of this (development) and asked to see him. The prison authorities said: “Dec. 8 and Dec. 9 are the weekend and no one will be working. The request is denied.” The family were not able to visit until Dec. 10, but Teacher Gong’s two daughters were not allowed to visit him in prison because they lacked ID cards. At a time when Teacher Gong is so critically ill, he is not allowed to see his two children and the two daughters can’t visit their sick father. The prison’s actions have caused us great pain, and we express our deep regret. During the visit, family members saw two people supporting Teacher Gong into the visitors room. Even with the two people holding on to him, he kept sliding down in his chair. His face was very red, he was drooling and unable to speak, and the left side of his body was paralyzed. His life is in danger and Teacher Gong needs timely treatment. We did all that we could do as family members. On Dec. 11, we the family members submitted to Hanxi Prison an application for a medical parole, but the Section Chief of the prison said the conditions had not been met. Yesterday afternoon, Teacher Gong’s youngest daughter went again to her local police station and asked for an ID card. Instead, she was frisked and interrogated for several hours until it was dark. Then, they photographed and fingerprinted her before releasing her.

We ask brothers and sisters from churches everywhere to extend a helping hand to our teacher Gong Shenliang, whose life is at stake, to pray for him, care about him and pay attention (to his case), so that he can be released on medical parole as soon as possible and receive timely treatment.

Members of the body of Christ:

We are the family members of Gong Dali who is being held in your prison. Our relative Gong Dali suddenly became very sick on the 2nd of this month and is in critical condition. He has been transferred to Hongshan Prison for treatment. Because he is critically ill, we went to see him yesterday and saw he was in a very bad state both physically and mentally. He can only lie in bed and was not able to talk to us. He needs timely medical treatment. His condition will not improve if he is treated in prison and he needs better medical care. Therefore, out of humanitarianism and in the spirit of “cure the sickness to save the patient,” we hereby apply for medical parole so that this loved one of ours can receive treatment at an early date and also to show the humane administration of the government!

To: Hanxi prison of Hubei province