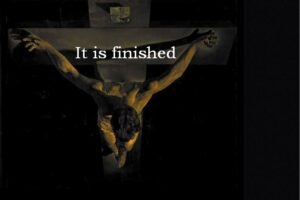 When Jesus had received the sour wine He said, “It is finished” and bowing His head He gave up His spirit. (John 19:30)

It is finished. A single word in the original. This was the briefest yet the fullest of His seven utterances and eternity will be needed for you and me to fully understand what this means – it is finished.

There is a big New Testament word – “propitiation.” Propitiation means that something has been fully taken care of – satisfied- appeased. Jesus propitiated (satisfied) the debt due all the sins of the human race. When He said, “It is finished,” the full payment of sin had been accomplished.

Jesus had also satisfied all the Law of Moses required and He had fulfilled and established all that prophecy had predicted – all the types and all the foreshadowings. All that the Father had given Him to do was complete. It was finished. Nothing was left wanting, all that was needed for redemption, done. The ransom had been paid as had all the wages of sin – paid in full.

Yes, the Resurrection and Ascension were yet to come but these were the fruit and reward of his finished work on the cross now completed. Nothing remained for Him to do. Nothing more awaited fulfillment. His work here on earth had been consummated.

“It is finished,” Jesus uttered. Not the despairing cry of a helpless martyr nor relief that His sufferings were over. But it was a declaration, a mighty declaration that what the Father had sent Him to do was now done. He had made a way for all of us to be forgiven, His blood shed for the erasing of our transgressions. And now a door to heaven was open for all who would believe.

“It is finished,” Jesus cried. On behalf of you, it was finished. What he had accomplished for all of us – astonishing – unimaginable – breathtaking.

Jesus paid it all. All to Him we owe. Sin had left a crimson stain. He washed it white as snow.