The Christian Church has lost one of its greatest leaders: John Stott. Uncle John, as many called him, went to be with his Lord on Wednesday, July 27th at 3:15 in London. He was 90 years old. 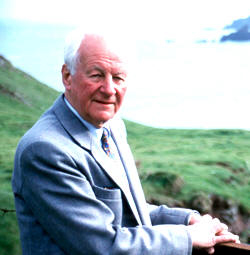 His life will be missed. But his wisdom and love of God lives on through his books and teachings.

Several years back I wrote an article on Mr. Stott’s influence in my life when I heard the news of his retirement. I release it again in his honor. The article was entitled, Heroes.

Ok, I admit it! I am a fan. But not in the traditional sense – one akin to rock stars, actors and sports figures. Rather, I am a fan of people the Lord has used: intelligent, God-saturated, and Christ-haunted; a life consumed by the radical transformation of the Holy Sprit.

I remember as a teenager hanging up pictures of Mother Teresa, Martin Luther King Jr., and passages from the Bible all over my wall. Growing up in a Presbyterian church, but, later, attending the Church of the Brethren, the folks I looked up to were the “radicals.”

Then I began to read.

It was in my late teenage years that I began to soak myself in Francis Schaeffer, C.S. Lewis, and John Stott, along with a long list of poets. Instead of putting posters on the wall of these new fellows (why aren’t there any good posters of them out there anyway?) I became a fan of their lives and ideas.

In a sense, these men became my heroes.

Heroes are hard to come by these days. People who are admired for noble qualities, exceptional achievements, and courage- in word and deed- truly are a thing to behold.

So when I hear that one of my heroes is to retire, my world stands silenced. I begin to ponder the beauty of what the Lord has accomplished in their life. I sit grateful that I had the opportunity to watch this hero interact with humanity; learning from his or her integrity, listening to his or her voice, and pondering his or her life.

The hero I am referring to is John Stott, British pastor, author, ornithologist, and Christian statesman. And though he is retiring from full time ministry in July 2007 at age 86, this champion of the Christian faith will remain as God made him to be – a humble, hero, impacting lives through his many books, sermons, and interaction with people and God’s creation throughout the world.

I must ask myself, what it is that makes John Stott a hero of mine? Though I can rattle off a list of things, one attributes come to mind: Knowing and Doing! John Stott not only taught us what to “know,” but encouraged us to “do” what we know!

Born in 1921, educated at Rugby and Cambridge, pastoring All Souls Church in London, and spending the remainder of his life as iterant preacher, pastor, bird-watcher, and author, John Stott has become one of the most influential and impacting men in the Christian world today (even in the “secular” media he has garnered some attention – Time Magazine and The New York Times).

In a day when the celebrity-pastor is the norm, John Stott is a gentle reminder that the mark of a man is not his fame or fortune, but the makeup of his character and the quality of his life and work, stemming from an unwavering trust in the One he serves- Jesus Christ.

True Stott has written over 50 books, many of them best sellers, but instead of buying the large house on the hill and retiring, he has elected to use the resources to build a Foundation (Langham Partnership) and promote missions throughout the world through pastor training and support.

True John Stott has framed some of the most important evangelical documents of the 20th century (Lausanne Covenant, and Evangelical Truth), written commentaries, theological works, and analysis of contemporary issues, yet what I marvel at is that his life never became just about knowing things (though important knowing is). Rather, his life has been balanced between the two worlds of ideas and action- knowing the Christian life and living the Christian life. John Stott has showed us that knowing and doing, understanding and living-out, are the two major components of the Christian life; two sides to the same coin. His life is a reflection of this balance (see the fine biography by Dudley-Smith to see how this balance has fully played out).

Through most of my early Christian life John Stott’s presence was through his books: The Cross of Christ, Basic Christianity, and his commentaries.

But in 2005 that all changed. After reading Evangelical Truth, I decided to reach out to one of my heroes- thanking him for the book.

To my surprise he contacted me back, via email. He had one of his assistants type up the email, but I was thrilled to receive it nonetheless.

As one who served at Calvary Chapel of Costa Mesa (along with another wonderful Christian leader, Chuck Smith), I wanted to let him know that his books and witness for Christ are appreciated.

I finally got to meet my hero in 2006. He was speaking at Mariner’s Church in Orange County on behalf of the John Stott Foundation. I went to listen and speak with him. It was blessing! To my surprise, the picture of us made it around the world on several websites- Christianity Today- among them.

So, as you wrap up your full time ministry this month, Mr. Stott, I, and millions of others, would like to say, “thank you” for being a faithful man of God, being obedient to the call Christ placed on your life, and teaching others to do the same.

May the Lord richly bless you in your retirement!

And now, three years after I wrote this article, I say, God bless you, John, for your life and ministry, our loss is heaven’s gain.

I close with a moving statement just issued by evangelist Billy Graham on the passing of John Stott:

“The evangelical world has lost one of its greatest spokesmen, and I have lost one of my close personal friends and advisors. I look forward to seeing him again when I go to Heaven,” he said from his home in Montreat, North Carolina.