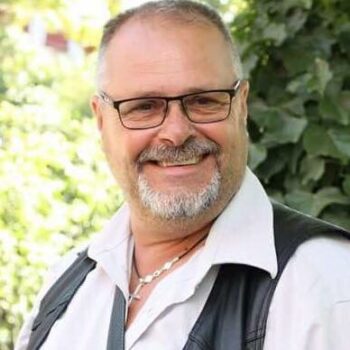 René Celinder was leading an all-night prayer vigil in support of the Jews at the Israel Plads in Copenhagen 2002, when a Palestinian immigrant struck him over the head with a cleaver at 3:00 a.m.

“Luckily, I have a hard head,” René quips. The doctor explained that had the attack not been a glancing blow, he could have died or wound up in a wheelchair.

From the hospital, he called his wife: “Don’t worry I’m alive,” he told her. “I just took a cleaver blow to my head. No problem. I’m ok.”

Raised by an abusive father, René became a painter and a handyman. When he contracted stomach cancer at age 30, he made a promise to God: “If you heal me, I will serve you for the rest of my life.”

He didn’t know God but remembered his childhood prayers from the ritualistic church he visited in his youth. The surgery removing the egg-sized mass was a success. René didn’t immediately fulfill his promise to serve God.

Three years later, he received a $50,000 insurance payout for the damage done by chemicals he worked with as a painter and fiberglass worker. He traveled and drank extensively until he spent all the money in under two years. Later he would resonate with the Prodigal Son when he read the Bible.

After the “living it up” was over, he had no money and nothing to do. An aunt told him to go to church and get saved. So that’s what he did.

Almost immediately, he enrolled in Bible school and was fascinated with the truth of Scripture. As he grew in the Lord he stopped swearing.

Unfortunately, he didn’t stop all sin. He fell into fornication with another student at the school. Caught by administrators, he got kicked out.

He returned home and avoided Christians and church because of his guilty conscience for some time. The brethren sought him out. Why aren’t you coming to church? they asked. “ I was afraid because I had been sinning so bad,” he said sincerely.

They encouraged him to return. When he did, he was embraced. He vowed to sin no more.

Eventually, he met and married his second wife, Dora, to whom he has been married for 25 years. He is now 66.

At a Christian camp years later, he spotted the old fling from Bible School. He asked his wife what he should do.

“You need to go ask for forgiveness?” Dora responded.

He did so. Then he asked her “spiritual parents” for forgiveness and then her kids. On the final day of the camp, both went up to the altar and asked the Lord for forgiveness.

“I learned forgiveness,” he comments. “Then I was free.”

René and Dora had a child, Emma, who was born with three holes in her heart. Doctors operated for 12 hours but were unable to save her. Baby Emma died six days after birth.

“I was really really angry at God,” he remembers. “I’ve never been angry like this before.”

René wanted to run away. But the doctor encouraged him to cradle his baby and to say goodbye. The grieving process was very healing. On the day of Emma’s funeral and burial, snow was falling, and the wind was blowing inhospitably. But after the sermon inside the church when they all came out, the storm had passed, and the sun was shining. It was beautiful moment to bury Emma. The birds were singing. He felt God’s presence.

René prayed a very unusual request: “Lord, show us our little girl one more time. I know that we cannot ask anything like this. But if you can, can you do something about it?”

Typically, a request to communicate with the dead is strictly a no-no because it derives from witchcraft. King Saul, in an attempt to contact the dead prophet Samuel, went to a medium. It was his last act of life; the next day he was killed on the field of battle.

One night she had a dream and in the dream she went to heaven. The first person to greet her was God.

“Father, have you seen our daughter?” Dora asked.

Yes, yes, she’s over there crawling around having a joyful time, He responded.

Then she talked to her baby, who, not limited to earthly constrains, could talk, René says.

Dora woke up happy. “We knew that we are going to see her again,” René explains. “She now would be 25 in human years.”

Moved on by the Lord, René opened his first cafe in a cellar. He invited people, gave them coffee and food, prayed for them for healing. It was a continual outreach center.

How he got the cafe is a miracle. When he first saw it available, it cost $5,000 a month. He felt God’s urging towards this place but couldn’t afford the rent. So he waited a year. The next time he saw it, the rent was now $2,000. He made his move.

Saying he had no money, he offered to paint for the owner to be able to use the cellar. After thinking it over for three days, the owner told him that he had no need of painting but if he would clean up and repair three flights of stairs, he could use the cellar for free. The job took four days.

For three years, he manned the cafe from morning until midnight, going up out into the street and inviting people in. When he touched the doorframe, he saw gold dust on his hands, a sign he interpreted to mean God’s blessing.

After meeting there for a while, God told him to find a new place. The old place got completely flooded. At first, he didn’t understand why God prompted him to move, but when he saw the flooding, he realized God had saved the ministry from being shut down.

“People came from all over Copenhagen,” he says. “I’m telling you, that was so great.”

Then came the Palestinian attack at the Israel Plads, a public memorial of the Holocaust perpetrated by the Nazis when they took over Denmark during WW2. René was praying other about15 people there, being confronted by some hostile Palestinians, who think Israel has not right to exist in the Holy Land.

The police had been monitoring the prayer vigil, but when the Palestinians left and evening fell, the police also left.

That’s when René’s attacker struck, in cahoots with another Palestinian who talked calmly to René, encouraging him to dialogue with the Palestinian. Specifically, he asked René to shake his hand. When René extended his hand, the Palestinian pulled out the cleaver and brought it down on his skull.

René survived the attack and was featured in the news.

A local Jewish organization invited him to an event to honor him for his support and suffering on behalf of Israel. Of course, René tried to get them saved.

During Covid, he was posting flyers with Psalm 91 around Copenhagen. He felt a tap on his shoulder. It was his adopted daughter from his first marriage, whom he hadn’t seen in decades and had no way to contact.

She recognized him. “I’m your daughter,” she said. “And this is your granddaughter.”

René was overcome with joy and hugged her repeatedly. “If I had money in the bank, I would give it all to you,” he said.

His two children with Dora don’t communicate with him because of his Christian convictions. Such is Denmark, he says. But his daughter, who is in a lesbian relationship, has rekindled their relationship. It seems ironic. But René is filled with joy at how God works.

About the writer of this article:Pastor Michael Ashcraft is also a financial professional in California.